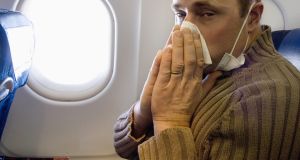 Anyone who was seated within two rows of a passenger diagnosed with Covid-19 shortly after they had taken a flight from northern Italy to Dublin this week has already been contacted, the HSE has said.

The announcement effectively means that if you haven’t heard from the HSE by now, you probably don’t have much to worry about. But the statement led some to wonder why only those seated within two rows of the passenger who later became sick would need to be informed.

The HSE’s rationale for this is straightforward: “That is close contact within the context of a plane.”

This approach is based on guidance from the World Health Organisation (WHO), which defines “close contact” as being within one metre of an infectious passenger.

But why two rows precisely? And what does that phrase – “close contact within the context of a plane” – mean in practice?

Outside the context of a plane, close contact is defined as “face-to-face contact” or “spending more than 15 minutes within two metres of an infected person,” the HSE says.

On a plane, which is not necessarily the petri-dish of biohazards that travellers sometimes assume, two metres is roughly two rows.

A 2018 study on “Behaviours, movements, and transmission of droplet-mediated respiratory diseases during transcontinental airline flights” carried out by the FlyHealthy Research Team at Emory University, Atlanta, found that “there is low probability of direct transmission to passengers not seated in close proximity to an infectious passenger.”

It’s not such good news if you’re one of “the 11 nearest neighbours” of an infected passenger. These people “have a high probability of becoming infected.” However, the study says, “the probability of transmission to each of the remaining passengers is quite low, less than 0.03.”

The study devised a “seating heat map”, to show the likelihood of every passenger on a flight becoming infected by somebody with a respiratory illness who is seated in an aisle seat in the middle of the plane. Its calculations placed the imaginary infectious passenger in seat 14C, and were based on a probability of infection of 0.018 for every minute of contact.

Passengers seated within a one metre radius of the putative patient in 14C were at highest risk, followed by crew members. “Non-seatmates in window seats have the least risk of infection,” the study found.

It concluded that a respiratory illness passed on via droplets in the air “is unlikely to be directly transmitted beyond one metre of the infectious passenger” – or beyond one row in either direction.

In other words, public health bodies making contact with passengers seated two rows in either direction should, in normal circumstances, be more than careful enough.

Passengers in aisle seats were most likely to get up during the flight – four in five left their seat, compared to 62 per cent in the middle seat, and 43 per cent who were seated by the window.

Because they were more likely to stay seated, window seat passengers had far fewer close encounters than people in other seats, averaging 12 contacts compared to the 58 and 64 respective contacts for passengers in middle and aisle seats.

But while the study suggests that the aisle is the riskiest place to sit, even someone in an aisle seat just two rows in front of an infected passenger would have little to worry about.

The study does, however, offer some notes of caution. “An infectious flight attendant can generate several infections; thus, it is imperative that flight attendants not fly when they are ill,” it warns.

The authors also point out that their findings are not applicable to “aerosol-transmitted diseases, such as tuberculosis, varicella, and measles,” which could be spread through the plane’s ventilation system.

It is not known yet exactly how this novel strain of coronavirus is transmitted. There have been reports of airborne transmission in China, although the WHO says it is not generally thought to be the case.

Other studies have shown that respiratory illnesses can spread through seats and tray tables. How long those droplets survive depends on whether it comes from mucus or saliva and whether the surface is porous or non-porous. But frequent hand-washing and a good supply of anti-bacterial wipes are never bad ideas if you’re travelling.

The HSE’s advice, which is not specific to airline passengers, suggests that to avoid infection you should:

1. Wash your hands properly and regularly

2. Cover your mouth and nose with a tissue or your sleeve when you cough and sneeze

3. Put used tissues into a bin and wash your hands

5. Do not touch your eyes, nose or mouth if your hands are not clean

6. Don’t use a face mask if you feel well and do not have symptoms – there’s no evidence that using masks is of benefit if you are not sick.