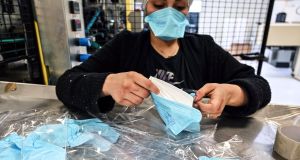 Protective face masks are packed on an assembly line at the Valmy plant in Mably, central France, amid the spread of Covid-19, the novel coronavirus, to Europe. Photograph: Philippe Desmazes/AFP via Getty

The coronavirus outbreak has entered a new phase, with positive news from China, where the spread of the disease has reportedly slowed, overshadowed by the rapid rise in cases elsewhere. This includes a woman who flew from Italy to Dublin and then travelled home to Northern Ireland. More than 81,000 infections, and 3,000 deaths, have now been reported across six continents since Covid-19 first emerged in the Chinese city of Wuhan in late December. Here and elsewhere, governments have to strike a delicate balance. They must press home the gravity of the situation and put in place effective containment and treatment plans, but do so without provoking panic about an illness that can – it’s worth stressing – still be contained.

As the disease spreads, scientists are racing to understand it. Early indications are that Covid-19, which has killed about 2 per cent of patients, is less deadly than Sars, a similar virus that caused a six-month epidemic in 2003 and killed 10 per cent of confirmed cases. But the number of known cases of the new disease is already 10 times higher than for Sars. Older people and those with underlying conditions appear to be more vulnerable than the young.

At one level, it is reassuring that a large majority of those with Covid-19 have suffered only mild symptoms – this was true of 81 per cent of the 44,672 cases identified in China by February 11th, according to the Chinese Centre for Disease Control and Prevention. Yet if large numbers of people can contract the virus but suffer symptoms so mild that they may pass it off as a cold, then its transmission will inevitably accelerate.

There are a number of possible outcomes of the current outbreak. Efficient containment efforts could cause transmission to peak. The disease itself could become less transmissible as it spreads. Or it could become more embedded as a recurring and potentially very serious illness, at least until a vaccine is developed.

Further spikes in reported cases could yet force the World Health Organisation (WHO) to declare a pandemic – defined as sustained transmission of a disease in different parts of the world – but it is understandably reluctant to do so. While that designation would mark a symbolic escalation in the global response and signal the seriousness of the situation, it would also run the risk of creating panic. A run on shops or the overwhelming of emergency departments would defeat the purpose of raising awareness. That’s the balance to be struck by governments in Ireland and elsewhere. Prepare for the worst. Urge people to adapt their behaviour and promote practical steps such as regular hand-washing and self-isolation. And drive home a point stressed by the WHO this week: that with a sense of urgency, solidarity and common purpose, Covid-19 can be brought under control.

1 Gabriel Scally warns against ‘rush’ to relax Covid-19 restrictions
2 Simple restorative exercises that can improve your posture after all the sitting
3 Normal People Class of 2020: The nine college friends in the series
4 We need to pay very close attention to what is happening in Britain now
5 Connell losing touch with club championship is real tragedy of Normal People
Real news has value SUBSCRIBE