Conor Pope: Scared to fly during Ophelia? I feel ya

A fear of flying makes sense during a storm, but what about the rest of the time? 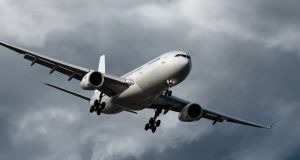 One in four people sitting on any plane has at least some fear of flying, with one in 10 suffering badly. Photograph: Getty Images

There was some pretty terrifying footage of planes landing at Irish airports when Ophelia was doing her worst, and that may have been behind Aer Lingus’s decision to allow passengers booked on flights due to leave during the storm rebook for another day at no cost – even if their original flights took off as planned.

If you are scared of flying at the best of times, imagine how terrifying it would have been to think of taking off in hurricane-strength winds? Even though all the planes coming into and out of Dublin did so without incident, the footage of wobbly 737s could not have gladden the heart of anyone with a fear of flying.

And there are a lot of such folk out there. In fact, one in four people sitting on any plane has at least some fear of flying, with one in 10 suffering badly. The fear affects all ages, with women slightly more prone to it than men and is both hideously complex and incredibly simple.

People with the fear fall into to two camps; there are those who are frightened of planes crashing and those who terrified of having a panic attack or doing something embarrassing onboard when they are trapped in a confined space. That anxiety can be seriously debilitating and bring on panic attacks and vomiting.

We have met people who abandoned their honeymoons at the check-in desk because they could not contemplate boarding planes, while others we have spoken to have simply decided they will never leave this island because to do so would mean they have to leave the ground first.

Ronald Reagan was famously terrified of flying. He endured a rough flight in California in 1937 and for nearly 30 years he criss-crossed the US by train only. When he became a presidential candidate he had no choice but to fight his fear. Once a fellow passenger congratulated him on overcoming the phobia, to which he replied: “Overcome it? Hell! I’m holding this plane up in the air by sheer willpower.”

Abba’s Agnetha Fältskog is something of a recluse thanks to her fear of flying. It developed after a private jet she was in hit bad weather in the US in 1979. “The pilot failed to land at the first attempt but then we landed at the second try . . . this event was a turning point,” she told interviewers not long ago.

Footballer Dennis Bergkamp was famous as the non-flying Dutchman. When he signed for Arsenal from Inter Milan in the mid 1990s, he had it written into his contract that he would never have to fly for football. He missed big European ties – and a World Cup because of his fear which developed after multiple flights on small “boneshaker jets”.

The scale of his fear was revealed in his autobiography. “It got so bad I would look up at the sky during away games to see what the weather was like. Were there any clouds coming? Sometimes I was preoccupied by the flight home while I was playing football. It was hell.”

All of the above developed their fear as a result of an incident – so on some levels it is rational – but for most people it can be much harder to determine what lies at the root of the phobia, because it is entirely irrational.

Take Jennifer Lawerence. In a recent interview with Entertainment Weekly she said she was “not afraid of the airplane, I’m afraid of me on the airplane and losing control of myself. You know when they hit an air pocket and it feels like you’re falling?” she said. “I did it on a night flight one time, ‘We’re going down! It’s coming down!’”

She also tried to jump out of an Air France plane because of some extreme claustrophobia. “I can’t believe I didn’t get arrested,” she said. “I got really claustrophobic and I had to get out.”

Experts in tackling the phobia say it must be attacked on multiple fronts. People must learn a little about the mechanics of flying while also learning techniques to take on their fear.

Turbulence is a “trigger event” which switches on anxiety. It is caused by air currents and while it is uncomfortable, it is not dangerous. Ask any pilot and they will tell you that a plane is never in any structural danger in turbulent conditions.

One psychologist we spoke to described the fear of flying as the “Rolls-Royce of phobias” as it involves the fear of heights, claustrophobia, the fear of fear, that meta worry when you are not sure what you are worried about so you worry about the worry.

The good news is that a fear of flying can be overcome. And there are courses that can help.

Flyfearless.ie run programmes every month at a costs of €200, while British Airways have a highly regarded course that involves taking a flight in the company of trained staff who will explain what is going on with a view to making it better. The downside is that the BA course tend to be run in the UK so you’d need to get there first. More information is available at flyingwithconfidence.com. An easier route might be Allen Carr’s book, The Easy Way to Enjoy Flying.

1. Understand the noises a plane makes. They are incredibly heavy metal tubes full of fuel and travel and ferocious speeds (sorry, sorry, we don’t mean to add to your woes). What we are trying to say is there is a lot going on under the hood from the moment the plane starts to taxi to the moment you get off and it is all benign. The more familiar you are with the noises the less scary they become.

2. The front is a less scary place. It is not any safer but turbulence tends to be worse at the back of the plane so if that is likely to cause you a problem sit close to the front.

3. Don’t drink or take drugs. Booze and anti-anxiety meds are many people’s treatments of choice. There are not to be recommended. They will do little to dull your anxiety over many hours and will leave you feeling hungover and anxious.

4. Distract yourself. Make sure you are in the middle of a great book before you get on the plane. Starting a new book is not much use. Have some brilliant films on your iPad. Sit beside a riveting conversationalist. Do whatever it takes to distract you. Mindlessly leafing through the in-flight magazine is not going to cut it.

5. Breathe. If you are anxious your heart rate will increase. And that will make you more anxious. So learn some breathing techniques – YouTube can help you out here. And, at the risk of being annoying, just relax. You’ll be grand. The riskiest part of any flight is the trip to and from the airport.