Do a cycling holiday – the easy way, of course

On a gruelling week-long cycle through Latvia, Lithuania and Estonia, sometimes it’s nice to just take the tourbus to the next hotel – and you still get to see all the sights 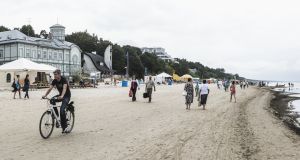 Cycling on the beach at Jurmala, Latvia – not as easy as it looks

There are, broadly speaking, two types of cycling holidays. There’s those cyclists you see on, say, the Beara Peninsula, slogging uphill with packed pannier bags on the front and rear – and, if they are real hardcore, a sleeping-bag strapped to the back carrier. Proper stuff. Then there’s the cycling holiday I went on: a week-long tour of the Baltic states, hotels every night, 35-40km cycles every day with nice lunches and even better dinners, everything planned and taken care of. And here’s the softie clincher: a bus to take us from point to point with a trailer at the back loaded with the bikes and our luggage.

That’s not to say it was all easy pedalling. A gung-ho attitude is probably part of every cycling holiday, so on day one, in biblical rain, we still did that day’s cycle. There’s no holiday joy in being freezing and wet down to your knickers (no, I didn’t bring the proper rain gear) while the rain makes it hard to see out your glasses. On another day, we had a grindingly miserable 16km cycle on a beach when surely everyone knows that cycling on sand isn’t actually a thing. It rained that day too – and this was July. There were, however, also glorious days of sunshine, the sort of days when cycling seems the only way to travel.

The trip took in the three states – starting in Latvia, moving on to Lithuania and finishing in Estonia– and in my tour-bus-taking defence, unless you’re Dan Martin in a yellow jersey you’re not going to be able to cycle through three entire countries in a week.

So this was a cycle holiday with what is known in the tourist trade as “bus transfers”, which sound quick and painless but what in reality were bus journeys of up to six hours through flat countryside where even the novelty of spotting a stork (they’re everywhere) wore thin. This trip is normally spread over nine days, which would make the long bus journeys more bearable. But the benefits of doing it this way were immediately obvious: we were accompanied at all times by a local guide who winkled out interesting, offbeat places to go and gave fascinating historical background – a must in the Baltics where a rich and complex history is so near the surface. By end of the short week there was a sense of having had a crash course in an area you (shamefully) know little about.

And that’s where this trip came into its own. Largely because of its Soviet past, sightseeing opportunities in the Baltics are very different from those experienced in southern Europe. And there were lovely cycles, particularly by the Baltic Sea, through stunning national parks. As this itinerary allowed for brief introductions to the capitals, there was an afternoon wandering around Riga’s stunning art deco district, another around the Jewish quarter in Vilnius and then the pretty-as-a-picture Tallinn, one of best-preserved medieval cities in Europe.

So busy and action-packed was this trip (I needed two days’ rest when I came home) that a day-to-day rundown of what us not-entirely-intrepid cyclists got up to would take pages. So instead here are some of the best sights I was able to see thanks to the packed – and exhausting – itinerary.

Just 30 minutes from Riga, Jurmala began in the early 19th century as a spa town for Russian officers to recuperate. The 32km-long beach fringed with pine forest and the occasional vast and crumbling old spa hotel looking out onto the Baltic Sea is beautiful. Jurmala quickly became an upmarket resort and it is fascinating to cycle around its quiet streets to see the range of holiday homes, from old wooden summer cottages and perfect examples of art deco houses to holiday homes newly built for the super-rich.

The country’s summer playground, with a long, deep beach, crashing waves, good restaurants, a relaxed atmosphere and parties and events in the summer. Looks like a terrific place for a family summer holiday. palangatic.lt

The entrance to this museum, 75km from Riga, is by far the most eccentric I have ever experienced. The Soviet-era nuclear bunker is under a large, still-working rehabilitation centre – that was its cover when it was opened in 1982. While we waited for our guide at the hospital reception desk, two elderly people were being admitted. It’s that strange. Through an unobtrusive door and down a flight of steps is a vast nuclear bunker designed for 250 of Latvia’s communist leaders to hole up in in the event of a chemical or nuclear attack. They could survive down there for three months. It’s a spooky warren of rooms. The original interiors such as offices, map room, the canteen and meeting rooms are preserved, as is the communication room to link with Moscow. Outside in the vast grounds a pond is really a camouflaged helicopter pad. bunkurs.lv/en/spiegu-bildes/

The Hill of Crosses, Lithuania

The name describes it: a hill made up of thousands of crosses, some the height of a house, others on the end of rosary beads, all left in this rural spot over the decades by pilgrims from all over the world. A defiant symbol of Christianity in Soviet times, it is now also a popular tourist attraction.

A Unesco World Heritage Site, the 98km Curonian Spit is a natural wonder. The narrow strip of land has cycle paths along the Baltic Sea on one side, and the Curonian Lagoon on the other, and its massive sand dunes are its main wonder. Stop at the village of Nida to see the fishermen’s old wooden houses and have a traditional smoked fish lunch in any of its many seaside restaurants.

There is a museum at the gates of this chilling place, but you’ll spend about five minutes there. Instead, the real treat in this former nuclear missile base built deep in the forest in the 1960s – and kept secret from ordinary Lithuanians – is the chance to go deep underground and see the bunkers where enormous missiles with enough firepower to flatten much of Europe were prepared for launch. It’s eerie. zemaitijosnp.lt

A lovely, peaceful place for a long cycle, with stops to wander around a medieval castle and have traditional food – order beetroot soup at every stop. A visual and taste treat.

Bernice Harrison travelled as a guest of Explore, which offers a nine-day easy grade Cycling the Baltic States trip through Lithuania, Latvia and Estonia from €1,113 per person