Dinner, B&B and no single supplement in Hotel Westport. The best travel deals at home and abroad this week 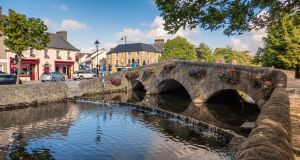 Take a five-day break in Westport this winter for €219

Escape to the West for five days for €219
Take the train to Westport and enjoy five days of pre-Christmas fun in four-star Hotel Westport. Over three weeks in November and December the hotel will have great value on five-night stays. There will be Christmas cookery demonstrations, quizzes, indoor bowls, poetry recital, music and dancing, carol singing, bingo and games. There is no single supplement and rates include B&B, dinner, complimentary use of the spa and all entertainment. Dates are Sunday, November 19th to Friday, November 24th for €239pp; Sunday, November 26th to Friday , December 1st for €239pp; Sunday, December 3rd to Friday, December 8th for €219pp, see hotelwestport.com, 098-25122.

Explore both US coasts on a flying visit

Taste the east and west coasts of America on a six-day trip to New York and San Francisco this December. It includes three nights in each city staying in the Stewart Hotel in New York and the Beresford in San Francisco and internal flights, from €1,025pps, in December. See americanholidays.com, ref. 1530856.

If you’d rather spend Christmas in the sun than the snow (or more likely, the rain), head to the Canaries for a week. Deals include one departing on December 21st, where you can spend a week in the Bahia Feliz Orquidea in Gran Canaria, from €1,109pps half-board, or travel on Christmas Eve to Melia Salinas, Costa Teguise, Lanzarote from €1,189pps all inclusive, thomsonholidays.ie, 1850 453545.

Donegal’s only five-star hotel, the Solis Lough Eske Castle is marking its 10th anniversary this month, with B&B, a €40 credit in Cedars Restaurant, plus a complimentary bottle of Prosecco, from €175 per night for two people sharing. Available during November and December. See solishotels.com, 074-9724100.

If you have business or family on the Qatar Airways network of more than 150 destinations, it’s worth looking at the current special offer from the Doha-based carrier. Treat yourself to two seats for the price of one in Business and First Class if booked by Monday, Octtober 16th for travel up to May 31st, 2018 – excluding flights from December 15th to January 10th, 2018. For example, two seats from Dublin to Hong Kong in Business Class are from €3,580, see qatarairways.com

Book by October 31st for flights departing Dublin to Dubai from €469, Perth from €969, Sydney from €1,049 and New Zealand from €1,149, and lots more routes on the Emirates network of 155 destinations. Blackout dates apply over the Christmas period, from mid-December to mid-January, with travel valid until June 20th, 2018. See emirates.com.

Take a three-night, four-day break to Spain’s former capital and enjoy the fabulous architecture, visit the Murillo Gardens, the Alcazar Royal Palace and the Giralda Tower of Seville Cathedral. Famous for flamenco, tapas and its rich cultural and architectural heritage, Seville is Andalucía’s most lively and colourful city, located on the banks of the River Guadalquivir. Prices start from €399pp including return flights from Dublin, transfers, 4-star B&B hotel accommodation, a half-day city tour, departing November 2017 and March 2018. See traveldepartment.ie, 01-6371600.

The Christmas cake and Christmas pudding that always work
7

At first I thought I was hungover: A stroke at 28 years old
8

Does aromatherapy have any real benefits?
Real news has value SUBSCRIBE