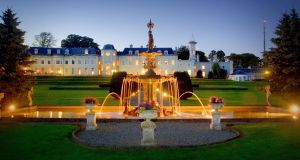 Black Friday deals: the five-star K Club is one of the Irish hotels rolling out offers this week

Black Friday and Cyber Monday might still be a bit of a gimmick on this side of the Atlantic, having first crossed from their US home less than a decade ago, but with many Irish hotels struggling like never before during the second Covid-19 lockdown, it’s hardly a surprise that they’re rolling out deals ahead of this weekend’s spendfest. Here are just some of the offers they’re making in the hope of tempting us to book in for an Irish break between now and the spring.

kclub.ie
Book before the end of November and the five-star hotel in Co Kildare is offering 20 per cent off all rates and packages on Thursdays and Fridays in January and February 2021.

thejohnstownestate.com
Pamper yourself with a rooftop thermal suite experience at The Johnstown Estate hotel in Co Meath - including overnight stay in a deluxe room, full Irish breakfast, 2 hour thermal spa experience, lunch, wifi and parking - for €195 for two people sharing (Mon-Thurs, Jan 3rd to March 31st). Or get 10 per cent off all gift vouchers for hotel stays, dining and spa experiences. Sale runs until  Sunday, November 29th.

flynnhotels.com
The Flynn Hotel Collection is cutting 20 per cent off all bed-and-breakfast bookings until the end of March 2021 at the Imperial in Cork, the Newpark in Kilkenny, the Old Ground in Ennis and the Park in Dungarvan. In a nice bonus that will support local food and drink producers,guests will receive a gift when they arrive. At the Imperial it will be a bottle of Killahora Orchards Poiré Fine Perry; at the Newpark it will be a bottle of Highbank Orchards apple gin; at the Old Ground Hotel it will be JJ Corry whiskey and Wilde Irish chocolate; and at the Park it will be a seaweed-bath pack from the Sea Gardener, a local food company ran by seaweed educator and forager Marie Power. These Green Friday offers run until Monday, November 30th.

hardrockhotels.com/dublin
Ireland’s first Hard Rock Hotel could scarcely have picked a worse year to open. It’s well worth a look in the weeks ahead: its music-inspired interiors include memorabilia from David Bowie, The Rolling Stones, Kurt Cobain and Beyoncé. For Black Friday it’s offering a room-only midweek deal – that’s between Sunday and Thursday – in January and February 2021 for €99. Other deals include 10 per cent off gift cards; dinner for two with a cocktail in Zampas Bar & Restaurant for €90 (down from €100); and its Toast & Jam offer, a night in a superior room for two with breakfast for €180 instead of €200. A two-night Dublin Rocks Experience costs €450 for two. Two nights for two, with breakfast and one dinner, as well as a couple of cocktails, is on offer for €405.

castleknockhotel.com
The Black Friday sale at Castleknock Hotel, in northwest Dublin, has 30 per cent off B&B on selected dates in the first quarter of 2021. Subscribe to the hotel’s database for early access to the deals, which open to the general public on Black Friday weekend.

fanningstowncastle.com
Fancy a castle to call your own? This one, in Adare, Co Limerick, is offering three nights’ self-catering accommodation for up to 10 people – the owners say it’s cosy and comfortable – until the end of February for €1,200.

lougheskecastlehotel.com
Lough Eske Castle, in Co Donegal, is offering a Winter Escape from €189 per person from Sundays to Fridays. The deal includes one night’s accommodation with a full Irish breakfast, as well as €20 credit per person for dinner, a bottle of prosecco in your room on arrival and 20 per cent off prebooked spa treatments. Or stay for three nights but only pay for two, with prices starting at €455 per couple.

redcastlehotel.com
Redcastle Hotel, also in Co Donegal, has a two-night winter retreat from €238 per room. The deal includes bed, breakfast and a three-course dinner on one night in the award-winning Edge restaurant, plus hot chocolate and marshmallows on arrival and €20 each in spa credit for two people.

titanichotelbelfast.com
The Titanic Hotel, in Belfast, has a two-night break that includes dinner on one of the nights for €312.

mountjuliet.ie
Mount Juliet Estate, in Co Kilkenny, is offering 10 per cent off gift cards bought online between Black Friday, on November 27th, and Cyber Monday, on November 30th. It also has a Cyber Weekend offer that starts at €99 for bed and breakfast; stay from December 3rd this year until April 30th, 2021.

originalirishhotels.com
Some lovely destinations are gathered under the Original Irish Hotels banner, from Parknasilla and Sneem, in Co Kerry, to Knockranny, in Co Mayo. They’re offering 10 per cent off its €500 packages for Black Friday and Cyber Monday. Call 01-2958900 and quote Black Friday to get a voucher, which are limited to five per buyer.

mountwolseley.ie
Mount Wolseley, in Co Carlow, is knocking 30 per cent off the price of bed and breakfast in all of its rooms, whether deluxe or executive, a family room or even a junior suite.

pressup.ie
The hotel and restaurant group is offering 25 per cent off best available rates in the Dean (Dublin & Cork), The Clarence, The Mayson, The Devlin and Glasson Lakehouse for stays between December 1st and  March 1st 2021. Sale ends Monday November 30th. And Press Up gift cards bought between Thursday and Monday 30th November will automatically get 20 per cent bonus value added.

herbertparkhotel.ie
The Herbert Park Hotel and Park Residence is offering 15 per cent off its Prosecco Package including an upgrade to Executive King Bedroom, a bottle of prosecco on arrival, breakfast  and parking.

hastingshotels.com
Northern Ireland hotel group Hastings Hotels is giving a £10 gift voucher for every £100 a customer spends on a Hastings Hotels Gift Card.  The cards have no expiry date and is redeemable at any one of its seven hotels.