Birdsong fills the air at rail stations across the country 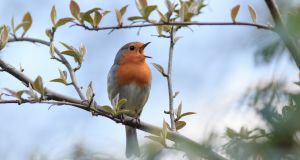 Birdsong will be played each day from 8am to 9am in rail stations until the end of November. Photograph: iStock

Ahhh. Remember the, um, good old days of the First Lockdown? There was illness, fear, financial hardship and loneliness. But there was also quiet streets, the pleasure of exploring your neighbourhood anew – rediscovering birdsong. Without traffic on the roads, and less competition from aircraft, many people commented on how birdsong in the mornings was more noticeable: a pleasure amid the pain.

Those – fewer – passengers waiting for their train these mornings will be forgiven for thinking the birdsong is back at full force again. Picking up on one of the small joys of lockdown is On Chorus, a new art project designed to brighten the morning commute. Travellers waiting for trains will hear birdsong from 8am to 9am, via the public address system (who knows, they may even hear the real thing as well). The public art project by sound artist Christopher Steenson runs until the end of November in train stations across the country.

Steenson’s project uses field recordings of the spring dawn chorus which he made during the first few weeks of lockdown, in inner-city Dublin along the banks of the Royal Canal Way, which runs along a railway line. Steenson later approached Irish Rail to see if they would be interested in broadcasting the soundscape.

We are bringing the sounds of the biodiversity around us into our stations with artist @chris_steenson and @BirdWatchIE during mornings over the next two weeks in our stations. For more info visit https://t.co/9f9Pvhv5BX pic.twitter.com/D2HnxPYJFp

During April 2020 there was an unprecedented period of silence and a reduction in noise pollution caused by the first Covid-19 lockdown, a boon for the often unnoticed wildlife in towns and cities. Iarnród Éireann said: “During this time, the sounds of towns and cities across Ireland were filled with the clear and uninterrupted sound of birdsong, which provided a stark contrast to the sounds of cars, planes and other machinery that usually consume our urban soundscapes,”

Irish Rail’s corporate communications manager Barry Kenny, speaking to RTÉ’s Morning Ireland, said the birdsong is calming and raises awareness of the type of bird life that we have in urban areas.

Activity on trains is significantly quieter right now, around 20 per cent of normal volumes, he said, and most commuters are essential workers and people travelling for education.

Even if you are not travelling by train this month, you can listen to the birdsong via the website