Will Galway beat Mayo? Perhaps it depends on who Ashford Castle plays for

Because of Level 3 lockdown, the location of the hotel has become very important 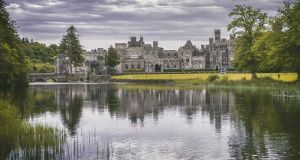 One of the most exclusive hotels in Ireland is hoping a long standing conflict between its postal address and its actual location will help it keep its doors open over the next three weeks, without sparking a turf war between rival counties.

When it comes to the property market everyone knows it is all about location, location, location, but in the middle of a global pandemic – with travel restrictions meaning people cannot even cross county boundaries – the placing of a hotel can suddenly and unexpectedly take on an importance that would once have been unimaginable.

Since it first opened its doors to guests, Ashford Castle’s postal address has been Cong, Co Mayo.

However, because of the way county borders were drawn, using the Cong River as a dividing line. the castle actually sits in Co Galway, while much of its sprawling grounds, its tea rooms and the Lodge at Ashford Castle accommodation are all in Mayo.

It is also impossible to drive to the castle – in Galway – without travelling through Co Mayo.

Until midnight on Tuesday, this was of little importance to anyone but locals keen to have bragging rights over the storied hotel but then, in a heartbeat, it started to matter a whole lot more.

Ashford Castle’s general manager Niall Rochford explained to The Irish Times that when he heard the whole country was moving into Level 3 of the Living With Covid-19 plan on Monday evening, his first instinct was to close for the duration.

“But then I heard the Tánaiste Leo Varadkar on the television that night saying the very reason it was Level 3 and not any higher was to protect local businesses. So, with the livelihoods of more than 400 staff at stake, I said, ‘let’s stay open and see if it works’.”

With that decision, the actual location of the hotel came into sharp focus.

Could the hotel welcome guests from Mayo or could it encourage people from a more populous Galway to cross something of their bucket list by making a booking?

“The hotel is in Galway and I know that when I posted that on Twitter last night, there were a lot of cross people in Mayo. These are people who have always had a a really strong connection with Ashford and that emotional bond was very evident. But we have always paid our rates to Galway County Council for the Castle and we pay our rates on the Lodge to Mayo County Council.”

So it was and open and shut case. Or maybe a case of open and not shutting.

Rochford also noted that guests who come from Galway City, Tuam or Oranmore or anywhere else in the county in the days ahead “will have to drive through Mayo to get here”, but with the attention to detail you might expect from a man at the helm of a five-star hotel for more than a decade, he made sure everything was in order first.

“People from Galway will be able to come to stay in the Castle over the next three weeks, but they won’t be able to get out of their cars when they are driving through Mayo,” he said.

He pointed out that like every other hotel in the country, the last several weeks – since enhanced restrictions were placed on Dublin – have been enormously challenging for Ashford, but said the hotel generated “more revenue from local people in a single day yesterday than we had in total in the previous three weeks.”

While the hotel will by no means be full in the days ahead, Rochford is hopeful the local business from Galway might be enough to keep the doors open and staff employed until the restrictions are lifted and people from around the country will be able to travel freely again.