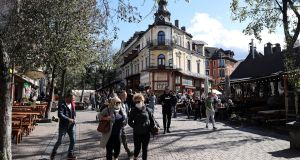 People walk on a street of Zakopane during the coronavirus pandemic, in Zakopane, in the Tatra Mountains, southern Poland, October 4th, 2020. Photograph: Grzegorz Momot/EPA

More than 36.15 million people have been reported to be infected by the novel coronavirus globally and 1,052,602 have died, according to a Reuters tally. Infections have been reported in more than 210 countries and territories since the first cases were identified in China in December 2019.

A total of 1,209 new coronavirus cases were recorded in Austria in the past 24 hours, clearly surpassing the previous record set in March during the first wave of infections, data sent by the interior ministry showed on Thursday.

Daily cases have been rising since late June and had recently come close to the March 26th record of 1,050, according to Austria’s main public health body, the Agency for Health and Food Safety (AGES). Of the new cases reported on Thursday, more than half, 613, were in Vienna.

Daily coronavirus cases in Poland surged over 40 per cent on Thursday compared to the previous day, as infection rates hit a new record just as the capital Warsaw was set to be added to a list of areas with additional restrictions.

Poland faces spiralling infection rates, and while authorities have sought to reassure the public that hospitals can cope doctors have warned that the system could soon face serious difficulties.

Poland reported a new record of 4,280 daily coronavirus cases on Thursday, according to the health ministry’s Twitter account, up 42.5 per cent compared to the 3,003 reported on Wednesday. It also reported 76 coronavirus-related deaths, a new record.

Other central and eastern European countries are also facing sharp increases, with the Czech Republic and Slovakia both reporting record numbers of cases on Thursday.

The daily tally of new coronavirus cases in Slovakia rose to 1,037, the highest since the pandemic reached the country, prime minister Igor Matovic said on Thursday.

His government introduced new curbs to contain the virus and approved a state of emergency from October 1st.

The medical system in Ukraine could break down because of a surge in new coronavirus cases and the number of hospitalised people, the country’s health minister warned on Thursday.

Ukraine registered a record 5,397 Covid-19 cases in the past 24 hours, up from the previous record of 4,753 new cases reported on Wednesday. The number of deaths grew by 93 and reached 4,690, Maksym Stepanov told a televised briefing.

“The medical system will simply not stand it if we all, without exception, simply do not begin to adhere to the rules,” Mr Stepanov said.

“The system has a certain verge . . . we have a limited number of resuscitators, doctors. Our doctors are exhausted, they have been saving lives for six months.”

The French government will put Lyon and Lille on maximum Covid-19 alert, France Inter radio reported on Thursday, paving the way for new restrictions to curb the spread of the novel coronavirus in the two cities.

Health minister Olivier Veran will announce the decision at a news conference on Thursday, it said on its website.

Officials at the French health ministry could not immediately be reached for comment.

Paris and Marseille are already on maximum alert. This has resulted in bars in the capital having to close for two weeks and restaurants have had to set up new sanitary protocols to stay open.

France has the ninth-highest Covid-19 death toll in the world, with 32,445 casualties.

New coronavirus cases are rising by about 14,000 a day in the United Kingdom and millions of people are living under a patchwork of different restrictions, though there is growing alarm about the economic cost of such rules.

“The virus is rising, in terms of the number of cases, quite significantly in the north west, in the north east and in a number of other cities like Nottingham,” Mr Jenrick told Sky.

“We are currently considering what the right action would be to take in those places,” he said. Asked if the actions would be similar to those in Scotland, he said a range of actions were being considered - including a more consistent approach.

The daily tally of new confirmed coronavirus cases in Germany leapt by almost half, official data showed on Thursday, a day after ministers agreed emergency measures to tamp down on domestic tourism to try to contain the second wave.

The number of confirmed coronavirus cases increased by 4,058 to 310,144, a rate not seen since April, lending weight to officials’ warnings that Germany is headed down the path of its neighbours if citizens don’t adhere to rigid social distancing.

“The number of new infections has gone over 4,000,” tweeted senior conservative legislator Norbert Roettgen, a candidate to succeed chancellor Angela Merkel. “It has almost doubled and is once again in the field of exponential growth . . . Everyone must do what they can to stop it from getting out of control again.”

The reported death toll rose by 16 to 9,578, the tally by the Robert Koch Institute for infectious diseases showed.

New cases have been spiralling elsewhere in Europe as the coming winter drives more people indoors, with cases soaring in neighbouring countries including Belgium, France and the Netherlands.

Most of Germany’s states agreed on Wednesday that residents of domestic coronavirus risk areas should not be allowed to stay in hotels in other parts of the country to curb surging numbers of new infections.

There were also 108 new deaths reported, taking the total to 11,580, the highest coronavirus death toll in Southeast Asia.

In a bulletin, the ministry said total confirmed infections have reached 331,869, while deaths have increased to 6,069.

1 The real Contagion virus is out there and it’s causing virologists to worry
2 US election: ‘Trump would not be caught dead here unless he wanted our votes’
3 First full moon on Halloween night since 1955 will be rare ‘blue moon’
4 Five nursing homes receiving ‘intensive’ State support as they battle serious coronavirus outbreaks
5 Man found guilty of murdering girlfriend during drinking session
Real news has value SUBSCRIBE