The town that got over a flood, a recession and a bypass

In 2014, Gort was identified as the place in Ireland hit hardest by the recession 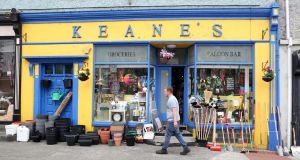 Keane’s, one of the colourful fronts in Gort, Co. Galway. Photograph: Joe O’Shaughnessy

It was the kind of statistic no town ever wants to have attached to its name. Back in 2014, a piece of research carried out by the Commission for the Economic Development of Rural Areas (Cedra) found that Gort in Co Galway was the town in Ireland worst hit by the recession.

Between 2006 and 2011, it lost 400 jobs and 14 per cent of its population. Jobs were lost with the closure of Duffy Meats, a factory in which many Brazilians had been working, and also when the construction industry imploded.

Fiona O’Driscoll and Peter Minihane are the owners of Gort’s SuperValu, which they have run for 12 years. They smile ruefully when the Cedra report is mentioned.

Growth is steadily returning to the town whose population was 2,994 in the 2016 census

“What wasn’t fully explained was why Gort was so badly hit,” O’Driscoll says. “The bypass arrived three years into the recession. Paid parking on Main Street was brought in during the recession, which doesn’t make sense. We had floods. The town itself didn’t flood, but the surrounding area did. Two thirds of our customers couldn’t reach us for three months. The canoes were going up and down the fields.”

“After the bypass, Gort went from a bustling town to having a trickle of people through it, but the advantage was that locals began to enjoy their town again,” O’Driscoll says, who grew up in the town.

While the Cedra report made for difficult reading at the time, both O’Driscoll and Minihane see it being a catalyst to action by local people. Along with other businesspeople and residents of the town, they formed the Burren Lowlands organisation, with the specific aim of bringing the town and the region towards a more secure and planned future.

Their focus is primarily on developing tourism and showcasing the quality of life to be had by living in the area. They have a 10-year plan and more than 30 people are involved, all on a voluntary basis: a striking example of a highly successful community development initiative.

The core mission statement of their plan is “to make this town and its hinterland region a better place to live, work and visit”. They also want to “capitalise on the motorway infrastructure” located a minute from the town centre and to build on “cross-county links between Galway and Clare.”

“You have to look forwards, not backwards,” O’Driscoll says. Among the projects they have worked on are voluntarily staffing a tourist office in the town’s square for five months of the year. They fundraised, renovated and opened Thoor Ballylee again, a former home of WB Yeats which had been closed for years due to flooding damage.

There are plans for a “loop” off the Wild Atlantic Way, which will include Coole Park, Thoor Ballylee and the round tower at Kilmacduagh Monastery, which is reputed to lean at an angle more acute than that of the Leaning Tower of Pisa.

“There is no reason why we shouldn’t have a year-round tourism business,” she says. “We are still a couple of years away from that.”

There is now a slip road and planned cycleway from Gort to Coole Park, a mile or so away; a park which the town considers to be its communal garden. A riverside walk is in development. With high prices of rent and property in Galway city and swift access via the motorway, they are now seeing people choosing to come and live in Gort.

Colm Farrell has run an auctioneer’s business in Gort since 2000. On a wall in his office is an old photograph of Gort’s main square, when the place was famous as a market town. Farrell’s father was a cattle dealer and he grew up knowing how important the town had been as market hub for all the surrounding towns and villages, such as Oranmore, Crusheen and Loughrea.

“The town was based around the agricultural community,” he explains. “Farmers would come in to sell their livestock and their wives would come with them to shop.”

That era is now over, as it for many other such towns around the country. Gort has lost many of its small shops and draperies. It now has an Aldi, a Lidl and a Centra, as well as the Super Valu.

“Aldi and Lidl brought a new era to the town,” Farrell says. He acknowledges that while “they took a lot of life out of the existing grocery shops”, there has been an upside to the presence of these large supermarkets.

“What we have seen an upsurge in is people using the eateries in the town. They are going for coffee and lunch when they come in to shop and we have seen more and more coffee shops opening. That’s a silver lining.”

Farrell sees the bypass and the M18 motorway as – so far – being good for the town. “There have been different outlooks. Some people thought it would kill the town. I don’t believe it has taken away business. The secret of the survival of this town is that there isn’t a service station on the motorway between Ennis and Galway, so people come in off the motorway for the cafes and food. I would definitely have a fear of a service station opening.”

Farrell reports that such is the demand from people wanting to live in Gort, that there is “nothing to rent”. His most recent rental was for a three-bedroomed house at €1,000 a month, a price he told the landlord was too high. It was subsequently rented to the first person who made contact.

Similar houses for sale are going between €160,000 and €190,000, although sales are slower than rentals. “We are now seeing people who can’t buy in Galway and Limerick, who are renting here; who want to try out the area first before committing to buying.”

There are currently two housing developments under construction in the town; itself an indicator of economic recovery. One is for 68 houses and the other for 22. Farrell points out that Gort is a heritage town and that many of the now empty, or only partially occupied, Georgian buildings on the main street have retained their original period features.

“Some of those buildings have rooms with 10, 11 foot-high ceilings. They were built with grandeur. And there are quite a lot of them. There is opportunity to develop them for accommodation. There is architectural heritage in this town we could make more of.”

Like O’Driscoll and Minihane, Farrell considers continued development of tourism to be crucial to the successful future of Gort. “Tourism – that’s where the jewel in the crown of the locality is,” as he puts it.

Local leadership like fosters an environment which makes Gort a better place to live, to visit and to work

Olivia O’Grady is the manager of Gort’s Lady Gregory Hotel. The hotel has 87 bedrooms and she reports that occupancy is robust year-round. From March to September, a large part of her trade is coach tours from abroad, with the domestic market filling in gaps the rest of the time.

“People are surprised when we tell them we are full, but the motorway has made us so accessible,” she explains. “Lack of accommodation is a real problem in the town, both for tourists and people who want to live here.”

Like Colm Farrell, O’Grady points out the potential of renovating and renting out some currently vacant period properties on Gort’s main street. “Rates are too high,” she says; a statement which every business owner in rural and small-town Ireland will echo.

Because rates are more expensive at walk-in, ground level, many ground floors in the town are vacant. This creates a negative impact to visitors to the town, who often don’t realise upper floors are occupied.

Later, I notice several boards on the footpaths that are advertising services on upper floors of buildings; buildings that would appear far more vibrant if they had a different visual message at eye-level.

Cathal O’Donoghue is the dean of the college of Arts, Social Sciences and Celtic Studies at NUIG. He reported on the Cedra document, back in 2014, which identified Gort as the town that had suffered the most in the recession. So what does he think of the interim progress the town has made since, and to what does he attribute its recovery?

“A very dynamic local community leadership,” is his response. He sees this community enterprise as having been “instrumental in establishing local development organisations including the Burren Lowlands Development Company that has led on a number of economic development initiatives.

“Local leadership like this fosters an environment which makes Gort a better place to live, to visit and to work. When you get the first two right, then the last follows.”