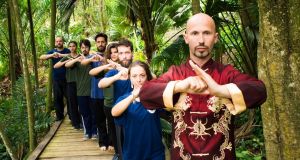 Niall O Floinn, head of Chen Tai Chi in Ireland, and his students

Niall O Floinn is head of Chen Tai Chi in Ireland and teaches Tai Chi to his students in classes in Galway and Clonmel, Co Tipperary. He gave us some more insight to the world’s most popular martial art.

Where does Tai Chi originate?

Tai Chi originates from Chen village in Henan Province, China. It was created 400 years ago using the most effective techniques from 16 martial arts and breathing exercises used by Dao Yin. For over 3,000 years prior to that it has a theoretical base linked to how energy builds through acupuncture meridian lines, the study of natural law dynamics and the study of yin and yang combining slow and fast, soft and hard, internal and external movements led by the mind.

It’s considered the jewel of all the Chinese martial arts, the most difficult to master while the most easy to start to practice. There are six bona fide traditional styles Chen, Yang, Wu, Hao, Sun and Zhaobao. The oldest is Chen style.

In Ireland, there is huge interest particularly in the health benefits that pertain to arthritis, osteoporosis, fibromyalgia and mental health. Chen Tai Chi Ireland certified instructors alone, have taught tens of thousands of students in the last 25 years and there are lots of small clubs nationwide doing great work promoting this fantastic art. Worldwide, Tai Chi is the most popular martial art in the world with 250 million active participants.

What is the main focus of Tai Chi?

In the beginning it’s relaxation and ridding the body of stiffness, as you become more loose, calm and sensitive you can begin to perceive deeper connections and sensations in your body. So moving slowly is not the goal – the less the error in the movement principle the greater Qi sensation. It helps to connect the body better and improves your health.

What would be the trademark move?

The main method of movement in Tai Chi is silk reeling, this is a figure of eight movement in the hips while in a half squat position like riding a horse.

Using the mind to lead the centre of your body to rotate and the legs to spiral while the arms, they’d inscribe an elliptical arc movement and the goal is to keep all the joints loose throughout the movement and the body connected so you could naturalise any incoming force with softness.

Softness is like the Yin aspect, and explosive release power from any part of the circular movement in a spiral line that focuses 100 per cent of you energy to a single point, that’s the Yang part of the movement.

How is it ranked? Do you compete?

There is both grading and competitions in Tai Chi. There’s a grading system called Duanwei, that was introduced here in the 1990s. Not everyone who practises Tai Chi is interested in that or is compelled to participate in it by their teacher because 98 per cent of people who practise Tai Chi are doing it for their health, not for competition or even for martial fighting skills.

Seeing a need for students to monitor their progress and to be encouraged, Chen Tai Chi Ireland developed an 18-stage level of progression that can be viewed on our website and it’s been approved by Master Wang Hai-Jun and he’s actually 30 times gold medallist National Champion of China and coach of the most National Champions of China and he’s my Shifu (teacher) for the last 17 years.

Chen Tai Chi Ireland is the largest association for Tai Chi in Ireland and if they can’t find a club near them they often recommend someone else who might not necessarily be trained by us, but we would have come in contact with them over the last 25 years.

Our President’s wife Sabina Higgins is a long-term Tai Chi practitioner and she actually learned in Galway and has spoken about how she would love to see Tai Chi introduced in schools nationwide to help with bullying, exam stress and giving kids high valuable internal recourses that will see them through their lives.

For adults I’d say cardiovascular issues like reducing high blood pressure and de-stress, mental health concerns due to its direct effects on activating the parasympathetic nervous system relaxation response and reducing stress hormones and increasing things like serotonin and dopamine that effect depression and mood.

It is the number one exercise for fall prevention due to how the weight transfers from leg to leg and core connection and its gentle relaxed movements can be used to maintain loose and mobile into old age.

It basically tones all the muscles of the body.

It’s been validated by world health organisations and Harvard medical school. There is a quote in a book called Harvard Medical School Guide to Tai Chi saying, “It’s a safe and effective exercise system that offers the greatest all round health benefits to the human body”.