‘We spend too much time rushing from one thing to another’: Why TDs and Senators could benefit from daily meditation 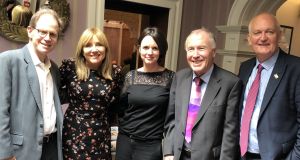 It seems like a big ask – expecting politicians to set aside daily time to meditate so that they can focus better on the multiple demands on their attention, energy and time.

But, that’s exactly what a small group of TDs and Senators aim to do when they set up a cross-party mindfulness group later this year. A small number of them already participated in an eight-week course on mindfulness earlier in 2019.

Independent Senator Frances Black says there is a lot of chaos in Leinster House and that mindfulness can give politicians a greater sense of groundedness. “I’m not saying it’s the answer, but it would help people be more respectful and compassionate and hear each other and value that while holding on to their beliefs,” she says.


Fine Gael TD Fiona O’Loughlin agrees: “We live in a maelstrom of busyness – running from chamber to committees to meetings, trying to return emails and phone calls and we often don’t even have time to talk to people in the corridors.”

Green Party TD Catherine Martin adds: “We want to demystify mindfulness and by practicing it, make us better at what we do. We spend too much time rushing from one thing to another.”

“If someone comes to stick a microphone or a camera in your face and you need to take a pause, that pause between impulse and action is what mindfulness creates. With mindfulness practice, the state that’s created becomes a trait [habit],” explains Prof Siegal, who set up the Mindsight Institute to promote the scientific approach to mindfulness which has its origins in Buddhism.

The idea is that mindfulness will allow politicians pull back from reacting emotionally and instead respond more calmly with better effect. Mindfulness advocates also claim that practicing mindfulness for as little as 10-12 minutes a day can help people think more clearly, speak more passionately, be driven by what they believe in and be healthier in mind and body.

Prof Siegal suggests that when meetings start with a two-minute breath practice, it helps those attending move into a more receptive brain state. “These practices are accessible to everyone. They aren’t difficult or complicated to do,” he adds as he gives those attending a few sample breathing exercises to try out.

Ruane organised the world’s first summit on mindful politics in 2017 and is chair of the all party group on wellbeing and economics at Westminster Parliament. Mindfulness practices now exist in 12 parliaments around the world – including in the UK where a group of MPs meet once a week for mindfulness meditation (although you could argue it hasn’t increased political skills during the protracted Brexit negotiations).

“Mindfulness is especially useful to help politicians deal with the ups and downs, and the highs and lows of politics – and the past three years has been one long low in British politics. The stress [of Brexit] has led to personal disassociation and a lot of abstention amongst MPs,” says Ruane.

On a personal level, Ruane says his mindfulness practice has changed his approach to debating. “I’m naturally a shoot-from-the-hip, emotionally driven, kinetic person, but it has helped me slow down a little. How many political careers have ended because of an immediate reaction? Mindfulness helps politicians disagree better.”

Ruane also believes there is a greater role for mindfulness training in society as an approach to dealing with mental health problems and as a life skill for young people.

The initiative to encourage Irish politicians to learn mindfulness has been led by Mindful Nation Ireland, a new organisation which wants to see mindfulness training introduced into schools, prisons and workplaces. “We felt that if we started with politicians, the potential to introduce policies around it would be greater,” says Mary Lovegrove, chief executive officer of Mindful Nation Ireland.

Ceann Comhairle Sean Ó Fearghaíl has supported the initiative, saying that politicians need to look after their mental health whilst facing multiple demands from constituency work as well as their parliamentary obligations.

Although mindfulness has grown hugely around the world in the last 10-15 years, it remains a practice used mainly by middle class white people. Senator Lynn Ruane says that for mindfulness to work for people who suffer poverty and trauma, mindfulness trainers need to understand the social context and what needs to be tackled to improve things. “When someone is in poverty or addiction, they don’t have the resources to access good supports,” she says.

Critics of mindfulness suggest that mindfulness might reduce spontaneity and action to change things in society that need to be changed. It’s one thing to find ways to reduce stress and anxiety among politicians but is there a risk that it could make people complacent about injustices and inequalities in society that it is their duty and responsibility to seek solutions for?

Prof Siegal disagrees with this analysis. He says: “You may not find solutions your country needs if you are working from a reactive state. But, you can be strong, clear and effective from a receptive state and able to diplomatically and assertively work towards the most appropriate pathway. Mindfulness is not passive.” And, he argues, there is more creativity and productivity with a diversity of opinions. Agreeing which policies lead, however, remains exactly the job for politicians to work out.