Will you be taking the #40days40items challenge this Lent?

Campaigners want you to declutter by Easter, then give the resulting haul to charity 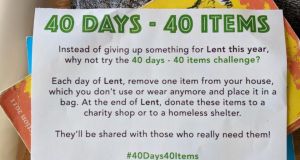 #40days40items: Each day of Lent you put an item you don’t use or wear any more in a bag; after 40 days you donate the contents to a charity shop or other good cause

Today is the start of Lent, and people around Ireland – even the lapsed Catholics among us – are using it as an opportunity for self-improvement, axing everything from alcohol to sugar in their morning cuppa.

But some have decided to make an alternative Lenten pledge, using the next six weeks to help people in need by taking the #40days40items challenge. The idea is simple. Each day of Lent you put an item you don’t use or wear any more in a bag. After 40 days you donate the contents to a charity shop or other good cause.

People have been sharing the idea on Facebook, Twitter and Instagram, and pledging to take part. The message? Instead of giving something up, why not give something away?

So rather than try and give up cake/biscuits/chocolate for Lent which I always fail to do - am going to do this instead #40days40items pic.twitter.com/RQ4l0oLAZd

No idea what to give up for #Lent - why not take part in the #40days40items challenge instead? (Can't believe we've only just heard of it!) pic.twitter.com/SJ1JvU6Z7l

This is not the first online challenge to promote Lenten decluttering. In 2011 the blogger Ann Marie Heasley of White House Black Shutters created the 40 Bags in 40 Days challenge, encouraging participants to clear out their homes one spot at a time. Eight years later, a Facebook group dedicated to the challenge has more than 80,000 members.

The #40days40items challenge fulfils the same purpose but is more manageable – and its timing could not be better, given Netflix’s hit series Tidying Up with Marie Kondo. Since the show debuted, in January, charity shops have reported a spike in donations. Many charity shops and organisations have welcomed the new challenge and encouraged people to take part.

So if you’re looking for an excuse to get rid of clothes, shoes, books, CDs, DVDs, bric-a-brac or furniture, now is your chance. It beats giving up crisps, anyway.

ESB adds pricing to its slower chargers for electric cars
6