Marie Kondo: How to declutter your life like a professional

Binge on Netflix with the Japanese tidying tsar

The Japanese tidying tsar Marie Kondo shows viewers of her new Netflix series how to declutter their lives. Video: Netflix 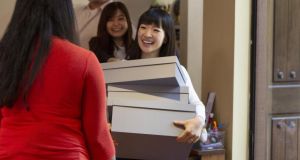 Tidying up with Marie Kondo.

Suffering from Janennui? After you’ve carefully picked yourself up from under the mound of Celebrations wrappers and with every available surface looking a bit like a Tracey Emin installation, trying to bring your living space into order can feel like a formidable task but there’s no need to be afraid, Netflix has you covered.

It knows that a new year brings a new you, so now your bingeing can have a motivational purpose as it presents: Tidying up with Marie Kondo, the Japanese tidying tsar – a sort of benign ethereal cleaning goddess by way of the magical Mary Poppins.

It’s the kind of show whose concept a sensible mam would tut at the mere thought of, as it imbues the act of cleaning with a ritualistic spirituality, not something that generally comes to mind when you’re throwing your pants into the washing machine.

This is no horrific voyeuristic Hoarders or How Clean is Your House? lifestyle show. This isn’t about identifying lurking bacteria, it doesn’t feature peroxide icon Kim Woodburn popping up to call you a “filthy bugger” for not emptying your ashtrays.

This technique is more about aesthetics and offering its participants a new way of life. The KonMari Method can take anything from six hours to six months to complete, depending on your level of slovenliness.

Which is an altogether terrifying prospect if you actually have things to do in your life other than “thank” your shrunken old Miss Selfridge boob tube for playing a part in your existence on that girls’ holiday in Magaluf, before you squash it into a black bag.

It’s difficult to picture Marie asking a worn-out single mother with three jobs to consider if her cardigan is bringing her “joy”, so the show therefore focuses on the strictly middle class, young working families or retirees who have the time to take the method on board.

A family like Kevin and Rachel Friend who are suffering under the strain of those minor household issues that pile up and become overwhelming. Kevin notes that they argue only over money and cleaning, with Rachel having hired someone to tackle their laundry such is her frustration.

Marie goes about showing them how to make space in their home by removing unnecessary items and holding onto only those they use or to which they have a strong attachment. She also informs the busy parents that while they are practising the art of folding clothes, they should be teaching their children along with them.

This is a neat game once or twice but there is only a vague discussion about what happens when the novelty wears off. There is no real insight into any struggles the families have with the method or the amount of time it took them to get used to it, there’s only the focus on its success, which seems a tad unrealistic.

The actual method itself comes across as a bit hokey, appealing to those who can afford to glamourise daily chores (a set of Marie Kondo organising boxes costs around $89 (€78.50)), attracting those viewers who watch Instagram star Mrs Hinch scrubbing her floorboards while Googling local cleaners.

It acts as visual ASMR for some viewers, with the satisfying sight of neatly folded piles of T-shirts having the soothing effect of a screensaver. The blindingly white filters of the show give it a dreamy, angelic feel as Marie tinkles on about the true happiness to be found in neatness.

Underneath the faux profundity there’s the enviable, appealing goal of downsizing and minimising the clutter in our lives. There is a certain attainable freedom and an emotional value to this, especially when you see someone like widow Margaret finally letting go of some of her husband’s personal belongings.

Throughout the series there is also a weight of guilt lifted from the women who tend to shoulder the responsibility of housework and feel the pressure to fit into a house-proud, picture perfect ideal.

Marie Kondo may be showing us how to fold away all our troubles but she can’t guarantee that they won’t reappear somewhere in the laundry bag of life.