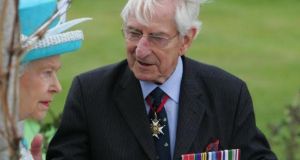 When Queen Elizabeth, on her historic State visit to this country in 2011, was shown around the national war memorial at Islandbridge in Dublin with then president Mary McAleese, television viewers might have wondered who was the bemedalled elderly gentleman acting as their guide, as he was not well-known to the general public.

However, retired British army Maj Gen David O’Morchoe, who has died aged 91, was well-known to representatives of the State, and especially our armed forces, as the president of the Royal British Legion (RBL) in the Republic of Ireland. Describing his achievement in 2014, the Northern Irish president of that body, Mervyn Elder, said O’Morchoe’s “quiet diplomacy” had very significantly changed the standing of the legion here, bringing back into public memory, and public celebration, the sacrifices of Irish men and women in Britain’s armed services during the first and second World Wars, such that the RBL “had prospered at all levels from government down [wards] in the South.”

This was marked by the presence of aides-de-camp of both President Michael D Higgins and Taoiseach Leo Varadkar at his funeral last week in Gorey, Co Wexford, to which and his family had retired in 1979, being long associated with that part of Leinster.

In his address at the funeral, the Church of Ireland Bishop of Ossory, Michael Burrowes, in a telling phrase, described this, remembering, element of O’Morchoe’s work as “showing the way of remembrance to bring about peace”.

Under the terms of legislation passed by the Oireachtas in 1943, O’Morchoe was one of a small number of people officially recognised as an hereditary Gaelic chieftain, (one who could trace his lineage back in direct succession for centuries) in his case of the O’Morchoe, ie the Murphy, clan. This entitled O’Morchoe to bear the title “The O’Morchoe” (pronounced “O’Murragh”), something of which he was understandably proud.

Born in Dublin in 1928, he spent his early years in India, where his father, Nial, commanded a regiment of the old British Indian Army. He and his family were nearly killed in a catastrophic earthquake in Quetta, now in Pakistan, in 1935, and thereafter David and his brother, Charles, lived in Dublin.

Educated at St Columba’s College, Rathfarnham, O’Morchoe attended the Royal Military Academy at Sandhurst and was commissioned into the Royal Irish Fusiliers (RIF) in 1948. Thereafter he quickly rose through the commissioned ranks to become in 1967, aged just 39, one of the youngest lieutenant colonels in the British army, when he took command of the RIF. He was to be the last commanding officer (CO) of the regiment, before its merger with other Irish regiments of the British army to form the Royal Irish Rangers. He became its first colonel in 1977.

O’Morchoe served in a very wide area of operations in many parts of the world, including Kenya in the early 1950s, Korea from 1955, and, for most of the late 1950s and early 1960s with the British Army of the Rhine, in Germany. This latter period coincided with the most acute stages of the cold war, including the building of the Berlin Wall in 1961 by the East German communist regime, and the Cuban missile crisis the following year, when many feared, with justification, that the world had teetered close to nuclear war.

During this period, he qualified as a paratrooper, adding that skill to his other sporting achievements as a keen yachtsman and rugby player. His former colleague and close friend, Adrian Naughten, who served under O’Morchoe as his signals officer in the RIF from 1967, told The Irish Times this week that O’Morchoe played out-half on the regiment’s rugby team, when all but six of whose players were ordinary soldiers or non-commissioned officers.

This was characteristic of him as a CO, Naughten remarking that “his loyalty to his most junior soldier was greater than any other loyalty he had, outside of his family”, something which was to the fore in his later work on behalf of ex-service personnel in Ireland through the RBL. This work was recognised by the appointment of O’Morchoe as a Commander of the Order of the British Empire (CBE) by Queen Elizabeth in 2007.

From 1969, O’Morchoe, was based at the British army’s staff college at Camberwell near London, where, among students from armies all over the world, he made the acquaintance of Irish Army officers on training courses there, something that would come in useful in his work in retirement with the RBL in the Republic, when he built up relations with Irish military personnel for such joint ceremonies as the National Day of Commemoration at the Museum of Modern Art at Kilmainham each July.

In his final two years before retirement, in 1979, O’Morchoe had perhaps the most colourful command of his whole career, when he was seconded to the Sultanate of Oman, a country with a long history of relations with Britain, as commander of its armed forces.

In retirement, O’Morchoe was very active in the Church of Ireland, being a member of the General Synod; and its property committee, helping to advise on the maintenance of churches and cathedrals. He also spent time as an adviser to the development charity Concern, working on world development issues with, among others, the late Fr Aengus Finucane.

David O’Morchoe is survived by his widow, Margaret O’Morchoe, nee Brewitte, a social scientist and native of Cork, and his children Dermot (who succeeds him in the title), Kevin and Maureen. He was predeceased by his brother, Charles, and his daughter Deirdre, who died in infancy.

Uncaged: the fashion sense of a fighter
8

Living on the edge: endless sea views in Skerries for €950k
10