'My 13-year-old does not have a smartphone. Parents can say no'

Jennifer O’Connell: I haven’t banned the internet. I just don’t want it in my kids' pockets 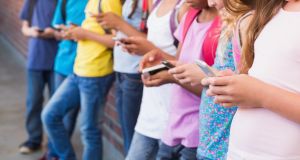 ‘Children with unsupervised internet access is a norm in urgent need of a national discussion.’ Photograph: iStock

A teacher I know recently asked her first year students to collaborate on a list of their needs and wants. The “needs” list featured just five items: food, water, clothes, shelter and a smartphone.

That won’t come as a surprise to anyone with even the most fleeting acquaintance with a teenager. Unfettered internet access has become a fundamental human right for the average Irish 13-year-old, a need as urgent and basic as food, shelter, a full fridge and the music of Lizzo. I’m not sure when this happened or who was consulted before smartphones were adopted as part of the universal declaration of the rights of the child. I wasn’t.

There has been a lot of discussion lately about what parents should be doing to keep their children safe online. Well-meaning experts and informed parents have explained that you should take their phone off them at night, introduce time limits on usage, make sure you have their passcodes, and talk openly to them about the kind of things they might encounter online, those dark impulses of humanity: bullying, abuse, gore, porn, predators, fake news, face-tuning, unrealistic body standards, sexting, scams, trolling, misogyny, racism, threats, drug peddlers, everyone else’s perfect life, and the WhatsApp group that you’re the only one not invited to.

Equally, I’ve never heard a single good reason why any 12-, 13- or 14-year-old needs a smartphone, other than “because everyone else has one”. But they don’t. My 13-year-old doesn’t have a smartphone. Neither does my almost 12-year-old. The 13-year-old does have a phone, her beloved Nokia Blockia, on which she can call, text or play Snake. At the last count, seven other children in first or second year at her school also have various versions of the old-fashioned, push button Nokia. That’s eight out of maybe 150 children, so they’re part of a small minority, but as far as I know, no one’s world has caved in as a result. They all have friends and social lives. They still talk to each other and to their parents. They may even talk to their parents more.

I haven’t tried to ban the internet for my children. I just don’t want the internet in their pockets. If they want to look something up or watch something on YouTube, they can do it on a laptop or a tablet, in a place where they can be seen. Sorry kids, but privacy is something that comes by degrees.

Saying no to a smartphone might have been more difficult if I had a better relationship with my own phone. It might have been harder if I wasn’t a woman who is also a journalist – which means that I’ve been on the receiving end of some of those darkest impulses of humanity for myself. When I get off my phone, I rarely feel better about the world. On a bad day, when there’s more than the usual volume of trolling, I feel hunted and depressed. I’ve seen what people are capable of when they’re looking at you through the disinhibiting, dehumanising filter of a screen, and I don’t want that for my children.

Smartphones have become a norm for anyone over 12, but over the centuries, there have been lots of unquestioned childhood norms that society eventually abandoned. Children used to be sent up chimneys, down mines, locked in industrial schools. They were ostracised if their families diverged from the holy Catholic norm of two married parents. When I started primary school, it was still legal and socially acceptable for teachers to hit us, and they frequently did. In the 1980s, we piled into the back of cars without seatbelts, got sunburnt on the beach and mainlined E-numbers. Norms change.

Children with unsupervised internet access is a norm in urgent need of a national discussion, particularly as more schools grapple to devise smartphone policies that won’t enrage parents, at the same time as they bring iPads into the classroom. Parents, legislators, experts and educators need to be involved. There’s one question that needs to be urgently addressed. Whose interest is served when a 13-year-old has unsupervised access to all of the information in the world and all of those dark impulses? Because it’s not the 13-year-old’s. It’s not their parents.

When we lived and worked in Silicon Valley, among some of the most senior employees of the world’s most powerful tech firms, it was striking how many of them didn’t allow their children to own their own smartphones and permitted them only very controlled access to screens. And then we came back to Ireland, and there were children with smartphones everywhere.

Bill Gates wouldn’t let his children have any kind of cellphone until they turned 14. Steve Jobs’s kids were not allowed to use the iPad. Those were major red flags, only we were too distracted to see them.