Acts of terror such as last week’s knife attack can dehumanise us too, if we let them 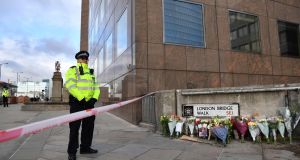 I cross London Bridge at lunch time semi-regularly. For a few months, I’ve been working at an office just by the bridge, and when I get tired of going round the corner to a well known chain for the overpriced, underflavoured soup I’ve been choking down for a week straight, I’ll venture across London Bridge.

There’s a nice place on the other side that does an equally overpriced rice and salad thing. You can choose what meat you want to have with it. They do something brilliant with cauliflower, so that it actually tastes like food. These are the dull features of daily work. You worry about the train. You think about how you should get to the post office while there’s time. What you don’t think about is whether you should keep an eye out for knife-wielding maniacs on the bridge as you walk across to get some lunch.

Evidently, the London Bridge attacker was an extremist ideologue and a terrorist, trying to cause maximal harm in the name of a poisonous belief system, but we didn’t know that at the time. Our office was – like all offices in the area – put on lockdown by the police. It was some time before it became clear that the man who had been shot on the bridge was shot by police; a man who was wrestled to the ground by members of the public after stabbing a number of people with two knives.

It wouldn’t be circulated until hours later again that the man, having been released from prison under licence for terrorist offences, had killed two people, as well as injuring others.

It would be after seven that night before we were allowed to leave, and without any sense of how long it would be, it is normal to feel a bit trapped and uncomfortable. What shocked me, though, were the selfish thoughts that came into my mind; the desire to get out. To go home. The resentment, even, that one small, hate-filled man could cause such carnage.

I felt ashamed, then, fretting about my Friday night, when two people had crossed the bridge at lunch time, like people who work in the area do all the time, and lost their lives. Acts of terror like this one are a symptom of deep dehumanisation – a person has to hate, hate, hate in order to don a false suicide vest, take two knives   and stab innocent people at random. He has to see them as mere symbols of opposition to his violent, oppressive worldview, and not as people, to feel entitled to undertake such a vicious and morally bereft action. He has to be so morally corrupt that he thinks himself unerringly, irrevocably in the right.

We always read and hear after events like these that a city won’t be cowed, won’t live in fear, will continue as normal. What we don’t consider enough, perhaps, is that acts of terror can dehumanise us too, if we let them, or rather, they can lead us to dehumanise one another. It is easy to drift into annoyance about delays, or anxiety about your commute home. This is the mechanics of city life in action. There are so many people, so much going on, that we often overlook one another just to make it through the day.

When you are on a train, and it stops because someone has tragically thrown themselves onto the tracks in front of the train ahead, the announcement comes in about what has happened. There will be delays. There will be a bus provided. You’ll be late for your appointment. Your journey will be doubled, or tripled. When you hear what has happened and start to think about the practicalities of what to do next, there are the people who feel pity, the people who feel inconvenienced, and the people who experience a conflict between the two.

We know what we are supposed to say about those sorts of events, but our thoughts can be more selfish, and less inclined to think of the individual who has died as a three dimensional person. They become an obstacle, an idea. In much more extreme circumstances, being very peripherally caught up in an event like the London Bridge attack generates the same choice, about whether or not to be compassionate, and patient, and human.

At times like those, humanity is precisely what is needed.