The schoolgirl wanted desperately to read a book. Her mother could not afford the €5

‘Your daughter has stolen a book. We found it wrapped up in her school jumper’ 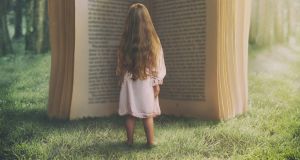 Books are out of reach for some children. Photograph: istock

At this time of giving and receiving, I’d like to tell you a seasonal story.

I know a woman who is a mother parenting three children alone. Her history is complex, her living situation extremely challenging. One winter day her eight-year-old daughter came back from school and asked her for €5 as there was a book fair coming up in the school, as is so often the way in the run-up to Christmas.

That afternoon, the little girl explained, the children had been allowed to leave their classrooms to look at the display for the fair. She had seen a book, a beautiful book, with a story she longed to read. She had held the crisp new volume in her hands and been pulled deep into the pages.

The woman’s young daughter loved to read; it brought her to other worlds, far away from the cramped and overcrowded facility where she had spent almost all of her childhood.

The child needed €5 to buy the book, but her mother didn’t have €5 to give her. The weekly stipend she received, which at that time was €19.10 a week for herself and €9.60 a week for each of her children, was not due until Thursday. And although this was only Monday, the woman had no money to spare. No money left at all. Nothing she could give her daughter.

'Was the school at all understanding?' I asked the mother

On the day of the book fair, the mother received an urgent call from her daughter’s teacher.

“There has been an incident,” the teacher said sternly. “Your daughter has stolen a book. We found it wrapped up in her school jumper.”

The girl, the mother was informed, was deeply upset.

“Was the school at all understanding?” I asked the mother.

“It was my failure,” she answered. “My inability to provide.”

“It was not your failure,” I told her. “It is our failure, our collective, unforgivable failure.”

I met the mother recently at a small literary event where she spoke with stirring clarity about living in direct provision, and specifically about its effect on children, many of them born into the system, who are forced to spend their childhoods in that deadening limbo.

Every day is difficult if you do not have a home, if you cannot cook a meal for your children, if you cannot close your own door against the night. Christmas without money or privacy, in a facility that houses hundreds of people, is deeply testing.

And now it’s Christmas, another critical time for those in direct provision

About three years ago, after the book incident, the mother and some friends came together and began an initiative called Every Child Is Your Child, to help support themselves and other families in direct provision. Their simple message is that all children deserve the chance to live full and happy lives.

Supported by the people of Limerick, Every Child Is Your Child had an inaugural event at Thomond Park, where a fund to assist parents facing particular difficulties in putting their children through school was established.

In that first year €3,000 was raised, money that stretched out, like the miracle of the loaves and fishes, to provide school uniforms and stationery for 60 local children living in direct provision.

In the intervening years the initiative has helped families to equip their children for secondary school on an equal footing with their classmates.

Besides uniforms and stationery, there is so much more that children need: books, bags, shoes, sports equipment, after-school study (for children with no space of their own), extra-curricular activities – the list goes on.

And now it’s Christmas, another critical time for those in direct provision.

Although the weekly government stipend was increased in March, to €29.80 per child, this is simply not enough money for parents to provide a gift and maybe a new set of clothes for their children.

That’s why Every Child Is Your Child is this year seeking Christmas donations, which will be spent on gift vouchers that parents can use to provide for their children. It’s a simple and effective idea.

“How will you spend your Christmas Day?” I asked the mother, over the phone.

“The usual lunch will be provided, then the staff will go home. There will be cold plates for collection – meat and salad – that we can take to our rooms.”

I found it difficult to find my voice to say goodbye.

Donations can be made through the website everychildireland.org or at paypal.me/everychild ireland. Gift cards and vouchers can be posted to, or dropped off at, C/O ECIYC, Doras, 51 O’Connell Street, Central Buildings, Limerick City, or at C/O ECIYC, The Canteen, 26 Catherine St, Limerick City