Pioneering surgeon who mentored many young surgeons throughout their careers 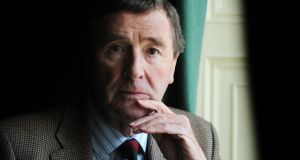 David Bouchier Hayes, Professor of Surgery at the Royal College of Surgeons from 1981 to 2005, died after a long illness on October 29th. Many would consider him the outstanding clinical and technical surgeon of his generation whose prime concern was always the care of his patients whom he treated with compassion, empathy and respect. He was a brilliant clinical teacher and trainer and mentored many young surgeons throughout their careers. He was a surgical innovator whose passion was scientific endeavour directed at solving clinical problems. He had a great intellect, a wicked sense of humour, but was a humble man who did not take himself too seriously.

David, one of 12 children, was born in Dublin in 1940. His father Thomas was a surgeon and his mother Mona a nurse. He grew up on Leeson Street and was educated at St Conleth’s College on Clyde Road. He studied medicine in University College Dublin and graduated in 1965 taking first place in paediatrics and Silver Medal in obstetrics.

Despite his prowess in these subjects, like his father before him David pursued a career in surgery.

His early surgical training was in Dublin, then becoming a surgical registrar in the Western Infirmary Glasgow. A further few years was spent in Dublin before a Fogarty Research Fellowship in the Massachusetts General Hospital, Boston in 1977. He was appointed consultant surgeon at the Richmond (St Laurence’s) Hospital in 1979 and transferred to Beaumont Hospital. The professorship of surgery at RCSI medical school followed in 1981.

David enjoyed teaching medical students and gave them a lot of time and attention. He believed educating them for life was just as important as teaching them facts about medicine and surgery. He knew all the students in each graduating class and personally mentored many of them in their postgraduate careers.

As professor of surgery in the Richmond, David built an enormous practice in vascular surgery. In Beaumont Hospital he and his team performed the first laparoscopic cholecystectomy in Ireland in 1990.

He set up a mentorship system where members of his department, experienced in the laparoscopic technique travelled to other surgical units nationwide to help surgeons safely introduce the technique. This was a unique national effort that resulted in the safe introduction of this complex surgical procedure with better, safer outcomes for patients.

In parallel with his clinical innovation and busy educational commitments David developed a very successful and productive surgical research facility in Beaumont and RCSI. He and his young researchers dominated the proceedings of many British and American Surgical Research Societies and won many prizes and medals for the quality of their work. This work led to Masterships in Surgery and PhD degrees and over 200 publications in peer reviewed journals. He retired as professor in 2005, was elected to the council of RCSI in 2006 and served three terms until 2012.

At the height of his clinical research activity David was appointed dean of the undergraduate medical school in RCSI and made a significant contribution to its development and expansion.

He was the editor of the Irish Journal of Medical Science 2005 -2011 and a member of editorial boards of several journals. He was president of the Royal Academy of Medicine of Ireland, 2003-2005.

He was a true polymath with interests in philosophy and poetry as well as surgery and surgical science.

His mentorship and support of thousands of medical students together with his professionalism had a profound influence and resulted in raising the standards of medical practice in Ireland and abroad. As a surgical leader it is impossible to overstate his impact on surgical practice and standards in Ireland during his lifetime and beyond.