‘I’ve had a Christmas on my own, with no gifts at all’

All I want for Christmas . . . Jerry Fish: The singer-songwriter talks about his best and worst Christmases 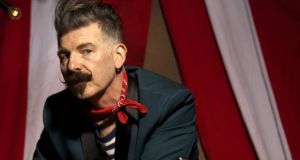 What Christmas traditions do you have?
My wife finally won me over with hers. When I was a kid, we all just ran downstairs and opened every present. She has a far more civilised way – we open one the night before, and then throughout the day we open one at a time. I revolted against it for many years, but it is lovely to have a present with dinner, then after dinner, and then at night. We have four kids, and it’s definitely made them less frantic.

Who would you most like to receive a Christmas card from this year?
My mother – but she’s not really a card person. That sounds very sad, doesn’t it? Well, I’m not a great card-giver either; maybe I inherited that from her.

What do you want from Santa this year?
D’you know, it sounds really corny, but I think . . . world peace. I feel like John Lennon, saying that.

Best and worst present you’ve ever received?
When I was a little boy, the first present I ever remember getting was a little Tom and Jerry toy guitar. That never left my head. The worst? I’ve had a Christmas on my own, with no gifts at all – so that was pretty sad. So no gift was the worst gift, haha. But someone did bring me a dinner so I got fed, at least.

How does Christmas Day typically play out for you?
We get up, have a lovely breakfast, share gifts. We light the fire; there’s brandy and mince pies and all that stuff. It’s a very peaceful day, and we have the usual big vegetarian dinner. It’s nice to be with each other. We don’t go anywhere, so it’s a ‘pyjamas’ day. Get dressed for dinner, that’s about it.

Who’s your fantasy Christmas dinner guest?
Charlie Chaplin. I grew up in south London and he’s from the same area. He was from a very humble, poor background and the laughter that he brought to the world was enormous, and I’d like to thank him for that. And I mean, who doesn’t want to have dinner with Charlie Chaplin?

Best part of Christmas dinner?
Chestnuts – in south London there was always roasted chestnuts for sale on the streets. They’re not big in Ireland, but I love them. And I do like a Brussels sprout, as well.

Who’s on your naughty list and your nice list this year?
Put all politicians on the naughty list – and Greta Thunberg is our angel on top of the Christmas tree.