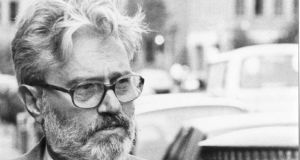 The symbolism is inescapable. As the direct line of James Joyce flickers out, a gesture is made to Ireland that can only be interpreted as reconciliation. The decision of Stephen Joyce, Joyce’s grandson who died on January 23rd, to recently accept Irish citizenship – to which, of course, he was entitled all along – no doubt had many, complex causes. It was certainly the product of delicate, prolonged contacts, with the role of President Michael D Higgins, who reached out to Stephen, being a vital one.

But one factor, often overlooked in the many controversies and disputes involving Stephen, was his very firm grip on what might, for want of a better term, be called the liberal agenda. Recent developments in this country – the referendums, the election of Higgins itself – would have played an important part in his decision.

If he was not convinced that the Ireland of today was fundamentally different from the country from which his grandfather fled and remained estranged, and which Stephen himself frequently condemned, no amount of sweet-talking from the Department of Foreign Affairs or anyone else would have brought him to this point.

Stephen James Joyce was born in Paris on February 15th, 1932, the son of James Joyce’s son George and of his wife Helen Kastor Fleischman, a wealthy American divorcee, who was considerably older than George. Stephen’s early years in Paris appear to have been happy ones; he was very close to his grandparents James and Nora, and in 1936 James Joyce wrote for him the story now known as “The Cat and the Devil”.

But towards the end of the decade, just as the political situation in Europe was deteriorating drastically, the Joyce family life also fell apart. (Stephen’s aunt Lucia was already in a mental institution elsewhere in France.) In 1939, Helen became increasingly erratic and overwrought, and eventually had a complete nervous breakdown. George also, who had become estranged from Helen, disappeared for some time. So Stephen was entirely looked after by his grandparents at this juncture.

Following the German conquest of France in 1940, the family first moved to Vichy France, where they were eventually rejoined by George. In late 1940, the four Joyces moved to Zürich, in Switzerland, where James Joyce died in January 1941. Stephen, Nora and George remained on in Zürich but life was difficult, partly due to problems in accessing James Joyce’s income, but even more by the now well-established alcoholism of George. He cannot have been much of a role model for a growing boy, so Nora continued to be Stephen’s principal carer.

In late 1946, aged only 14, Stephen left Europe to study at the Phillips Andover Academy in Massachusetts and later at Harvard University. He was anxious to carve out his own life, separate from those of his father and grandfather, a goal in which he succeeded. He lived with his mother’s family and acquired an American accent which often disconcerted those who first encountered him.

On graduating from Harvard, where he studied international relations, Stephen joined the Organisation for Economic Co-operation and Development, based in Paris. He worked principally in sub-Saharan development. In 1955, he married Solange Raytzin, a French dentist.

Stephen in those years remained quite detached from his grandfather’s legacy. His father George was of course in charge of the estate, but permissions, copyrights etc were handled by the Society of Authors. On George’s death in 1976, Stephen became the principal trustee of the estate, but initially things continued as they had under George.

As the 1980s went on, however, and especially following controversy over the Gabler edition of Ulysses in 1984, he began to be more actively involved. He removed control of the literary estate from the Society of Authors and took it over himself. In 1991 he retired from the OECD and he and his wife went to live on the Île de Ré, off the French Atlantic coast, near La Rochelle, where he died.

Stephen began to subject applications for permissions in relation to Joyce’s works to increasingly severe scrutiny, all done, he said, with the aim of protecting the importance and integrity of his grandfather’s works. As he memorably told the assembled Joyce scholars at the 1990 Monaco symposium: “You may not like it, but that’s the way it is.”

For Stephen, the value of his grandfather’s work was measured in purely monetary terms. This led often to excessive, not to say outrageous, demands on innocent souls seeking copyright permissions. Examples abound: a hypermedia Ulysses project involving the American scholar Michael Groden was completely stymied by a modest request for a fee of two million dollars (later lowered to between half a million and one million dollars); an effort by Cork University Press to reproduce some pages of Joyce’s work in an anthology led to a costly legal action and defeat that for some years greatly curbed the press’s work.

A particular target was the Irish scholar Danis Rose. Relations between the two, already poor, were rendered poisonous by the appearance in 1997 of Rose’s edition of Ulysses (it must be said that many other Joyce scholars felt Rose had taken unacceptable liberties with the text and it has never gained endorsement). From then on, nothing that Rose was involved in had any hope of acceptance from the Joyce estate. Nearly as bad as these concrete actions was the atmosphere of threat and menace that the estate maintained over the whole Joyce world.

With regard to permissions for performances of Joyce’s works, where there was some legal limitation on what could be charged, the most common tactic was simply outright refusal, on such aesthetic grounds as “my wife and I don’t like your music”. The estate has the melancholy distinction of having necessitated a special Act of the Oireachtas to protect an exhibition of Joyce manuscripts acquired by the National Library in 2004. (Stephen would frequently boast about this.) At times, he was justified in some of his campaigns: an example was the proposal to auction off a death mask of his grandfather, which was at best insensitive and was happily withdrawn.

With the expiry of copyright in Joyce’s published works in most jurisdictions in 2012, and also defeat for the estate in a court action taken by Lucia Joyce’s biographer, Carol Shloss, Stephen’s powers were much curtailed, though there remained areas in which he could still exercise control – and did so.

The death in 2017 of Solange was a heavy blow to him, and his own deterioration since that time has been very evident. Famously, Ireland was not officially represented at James Joyce’s funeral; it most certainly was at his grandson’s, with the Ambassador to France, Patricia O’Brien, present at the ceremony in La Rochelle. His ashes have been placed with Solange’s on French soil; the family grave in Zürich remains undisturbed.

Stephen is of course the subject of James Joyce’s poem Ecce Puer, written to mark his birth. In the poem, James links Stephen’s birth to the death, only very shortly before, of his great-grandfather, John Stanislaus Joyce. Thus, four generations of the Joyce family are brought together. With Stephen’s passing, this long chain comes to an end; there is closure, just as Stephen’s final gesture can be seen to have brought closure to the long and fraught relationship between that very special family and Ireland.