Post revolution in 2011 she remained an independent voice, refusing to join a political party or non-governmental group 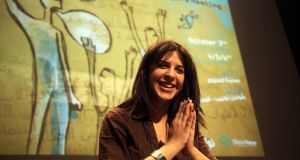 Tunisian blogger Lina Ben Mhenni: her blog was among the first to report when Mohamed Bouazizi set himself on fire in December 2010 in Sidi Bouzid, the incident that sparked the Tunisian revolution in 2011. Photograph: EPA

The Tunisian blogger and activist Lina Ben Mhenni was a symbol of her country’s 2011 revolution, celebrated for her courage, fierce independence and dedication to the defence of human rights. Through her blog, A Tunisian Girl, Ben Mhenni, who has died at the age of 36, defied the repressive state of Zein al-Abidine Ben Ali, the ousted dictator, to expose police brutality against protesters who took to the streets in December 2010 to vent fury against poverty, corruption and oppression.

The protests started in the city of Sidi Bouzid in the interior of the country after Mohamed Bouazizi, a street vendor who had been harassed and insulted by police, set himself on fire. In a country with a controlled press, there was little information coming out, but Ben Mhenni, at great personal risk, rushed there to take pictures, film and cover the protests posting the material on her blog. Written in Arabic, French and English, it became one of the main sources of information about shootings and other repressive measures the regime wanted to cover up.

“I took photos of the corpses of young people who were just killed by the security forces, it was really hard,” she later told an interviewer. “In one of the houses, I was shaking, I couldn’t take photos, but it was the mother of one of the martyrs who said: ‘You have to [DO IT]and show this to people around the world.’ I was crying and shaking.”

Ben Mhenni had to hide in Tunis after her forays into the interior, said Henda Chennaoui, a journalist and close friend. She had never resorted to anonymity and police already knew her by name. Before the revolution, in 2009, Ben Mhenni and a small group of cyber activists had organised a campaign for the release of political prisoners. Her home was broken into by the security services in 2010 and they stole her laptop and cameras.

The protests in Sidi Bouzid very quickly spread to other cities, and four weeks later, on January 14, 2011, Ben Ali stepped down and fled the country with most of his extended family. It was a moment of hope and inspiration for the Arab world. The success of the revolution helped unleash a series of uprisings in the region, from Egypt to Libya, Syria, Bahrain and Yemen. In most of these countries, activists and citizen journalists like Ben Mhenni used blogs and social media to mobilise protests and chronicle the violence of regimes that had long believed they were secure, having crushed all organised opposition.

Born in 1983 and raised in Tunis, Lina Ben Mhenni was the daughter of leftwing activists. Her father, Sadok, is a former political prisoner and Emna, her mother, is a teacher who was involved in the student union movement.

From childhood Ben Mhenni suffered from the autoimmune disease Lupus. Her mother donated a kidney to her in 2007. The chronic illness did not deter her from political activism, even in recent years when there were long bouts of ill health. A linguist, who taught English at the University of Tunis until a few years ago, Ben Mhenni was also an athlete. She won silver medals in the World Transplant Games in the late 2000s.

Almost a decade after the uprisings of 2011, Tunisia is the only country in the region that can still be described as a democracy. The path has not been smooth; Tunisian politics is often paralysed and the economic situation is parlous. But Islamist and secular political groups have compromised, elections do not have pre-determined results, the military are in their barracks, and space for civil society remains open.

After the revolution, Ben Mhenni remained an independent voice, refusing to join a political party or non-governmental group. She was involved in the fight for women’s rights and an implacable opponent of attempts to retreat into authoritarianism. There were some who had scores to settle with her and in 2014 she was beaten up badly by police at a holiday resort.

As her health deteriorated, friends say she refused to travel for treatment, and campaigned for improvements in public hospitals, highlighting shortages of medicine and the importance of organ donation. “She never stopped her work and activism,” said Olfa Lamloum, head of International Alert Tunisia, an international NGO. “She took part in marches between hospital stays. She struggled for people’s rights even as she fought death.”

Her funeral this week brought civil society activists, feminists, former prisoners and mothers of martyrs together. Her coffin, wrapped in a Tunisian flag, was carried by women. “The funeral resembled Lina,” said Ms Chennaoui. “Everyone who knew her was there to say goodbye.” – Copyright The Financial Times Limited 2020