Ross O’Carroll-Kelly: ‘I want you to flirt with the girl on the reception desk’ 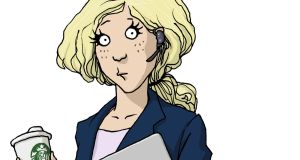 Seriously, to be a Mount Anville mom, you’d want the stamina of a focking camel

Sorcha comes chorging into the livingroom like the corbon monoxide alorm is going off. She’s like, “Well? Did you do it?”

I’m sitting down to rewatch the Ireland v Scotland match with my famous Tactics Book open across my thighs.

She goes, “Oh my God, Ross, today was the day that the application form for St Íte’s went live!”

“Are you actually serious? St Íte’s is an Irish college. Okay, that’s the understatement of the century. It’s, like, the Irish college. It’s in, like, Connemora. It’s where – oh my God – everyone is sending their kids this year.”

She storts pacing back and forth in front of the TV.

“Of course they’re not! It’s a game of bluff and counterbluff! They know that almost all of these colleges take a maximum of, like, 10 students from each secondary school. So the trick is to identify the one that literally no one is talking about - and that’s the one where everyone wants their kids to go.”

How can I chillax when Honor might end up having to go to an Irish college that none of the popular girls are going to?

Seriously, to be a Mount Anville mom, you’d want the stamina of a focking camel.

She goes, “I’ve been following the conversation on the Gaelgoiri WhatsApp since the end of August and St Íte’s is the only college that no one has mentioned. That’s why I told you to print out the form as soon as it went live at, like, nine o’clock!”

She’s like, “How can I chillax, Ross, when Honor might end up having to go to an Irish college that literally none of the popular girls are going to?”

“You did? Oh my God, why did you just put me through that?”

She even laughs, in fairness to her, even if it is out of sheer relief.

“I was going to post it this afternoon. I have my video analysis to do of the Scotland match.”

Nothing much happens on the drive to Connemora, except that Sorcha attempts to break the world landspeed record

“Ross, all of the other moms will have been at the post office with their forms filled in at, like, half-nine this morning. Jesus, Grainne Lessing always takes hers directly to the sorting office. Honor is going to go – oh my God – ballistic?”

She rushes out of the room and returns 30 seconds later with the form in one hand and her coat in the other. She goes, “We’ll take my cor.”

Nothing much happens during the drive to, like she said, Connemora, except that Sorcha attempts to break the world landspeed record and every time I try to strike up a conversation – about, for example, the positive aspects of Ireland’s attacking game – she tells me that, if our daughter ends up being a social pariah, it’ll be my fault.

We eventually reach our destination. We pork outside St Íte’s and she hands me the letter – and that’s when she drops what would have to be described as a bit of a bombshell.

“Okay,” she goes, “it says on the website that they don’t actually accept application forms delivered by hand.”

“Oh my God, Ross, do I have to spell it out for you? I want you to flirt with the girl on the reception desk.”

“I thought you hate it when I flirt with other women?”

“No, I hate it when you sleep with other women. In this case, I’m giving you permission to flirt.”

She leans across in her seat and storts combing my hair with her fingers to cover over my bald bits. “Open another button on that shirt,” she goes. “And don’t be afraid to smile. You’ve got a good smile – as in, very persuasive.”

He says something to me in Irish. He’s like, “Dia is Mhuire dhuit.”

And I’m there, “Conas a speaka the English?” which is the only Irish I ever bothered to learn.

And you’d maybe want to close one of those shirt buttons – there’s a gale blowing out there!

He obviously gets the message because he goes, “Can I help you?”

And I’m like, “Yeah, no, I have this application form for my daughter. She’s hoping to come here in the summer.”

“I’m sorry,” he goes, “we don’t accept hand-delivered applications. It says it on the website.”

“I’m sorry, no ifs or buts. You’ll have to post it the same as everyone else. And you’d maybe want to close one of those shirt buttons – there’s a gale blowing out there!”

He has a little chuckle to himself.

Ten seconds later, I’m walking out of the building and who do I end up passing on his way in? The actual postman.

Suddenly, without even knowing that I’m going to say it, I hear myself go, “Sorry, you dropped this.”

He turns around, takes the letter from me and adds it to his stack. He goes, “Go raibh maith agat!” and I just smile at him like I understand what he’s trying to say.

I walk back to the cor with my orms held aloft in triumph. But I don’t get the grateful response from Sorcha that I’m expecting. As a matter of fact, she’s got, like, tears streaming down her face.

She goes, “I got it wrong, Ross. The college they’re all going to is Scoil Naomh Pádraig. How long is the drive to Dingle?”