The risk of contracting mass hysteria is much higher than coronavirus

Jennifer O'Connell: There’s nothing quite like an emerging health crisis to bring out the horror movie fan in us 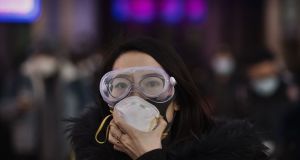 A Chinese woman wears a protective mask and swimming goggles after getting off a train as she and others return from the Spring Festival holiday on January 31, in Beijing, China. Photograph: Kevin Frayer/Getty Images

It opens, like all the best horror movies, with a montage of cosy domesticity. “Joe brought it home from the office,” the lady in the voiceover says in the kind of warm, saccharine voice that can only be a harbinger of unimaginable evils.

Against a cheery soundtrack of country music, moustachioed Joe hangs up his trench coat, and kisses his wife. “He gave it to Betty,” the syrupy voice goes on, and as a child appears, “and to one of his kids.”

Joe is on the porch now, seeing Betty’s mother off. “And Betty’s mother.” She gives it to a cab driver, a ticket agent a charming stewardess and her pal Dotty.

“But Dotty had a heart condition and she died,” the voiceover says, now positively gleeful. “Before she died, Dotty gave it to her girlfriend, the pizza boy, and the vet when she went to pick up her chihuahua . . . ”

Syrupy voice must succumb to the virus herself at this point, because a male voiceover artist steps in. “If a swine flu epidemic comes, this is how it could spread.”

There’s nothing quite like an emerging health crisis in a just-distant-enough part of the world to bring out the horror movie fan in all of us. Every few years, one arrives along to reminds us just how vulnerable and fleeting our existence on this planet is. We read the headlines and wonder briefly if we could be Joe and Betty, pootling along in our vignettes of cosy domesticity, while an unheard voiceover narrates our demise.

The swine flu epidemic that was the subject of this terrifying 1976 public health campaign didn’t actually materialise. The ominous ads sent 46 million Joes and Bettys scurrying for the vaccine, but only one person died from the virus. Twenty five died from the vaccine.

Now we’re in the throes of a proper global health emergency. And as the numbers infected with coronavirus grow, the world is reacting with predictable levels of apocalyptic doom. Sales of face masks have soared. The skies over China have emptied. Ikea has shut its stores in the country.

The threat from the virus is real. Given what we know about how the Sars virus was covered up in China, the numbers infected could well be higher than the official figures. More than 3,000 cases were reported in one single day this week. There is no vaccine. It can develop into pneumonia. It is potentially fatal.

These facts are important, but so too is approaching them with a degree of critical thinking. At times of mass hysteria, it’s often a good idea to ask a few questions. What other narrative might this fearmongering serve? Who’s doing well out of this?

Because panic is always profitable for someone. In 1976, the main beneficiaries of the swine flu hysteria were the drugs companies peddling an untested vaccine.

In 2020, the winners are not just the pharmaceutical companies, whose stock prices are surging in anticipation of tests and treatments. The Trump administration also sees a positive in the coronavirus: commerce secretary Wilbur Ross speculated that a pandemic would drive a return of jobs to North America. Investors hoarding assets seen as safe havens in times of economic stress – gold, the Swiss franc, Japanese yen – are making billions. So are those who would like to use the outbreak as an excuse to restrict civil liberties.

But the biggest beneficiaries are probably the peddlers of fake news and pseudoscience and racist memes and conspiracy theories, which spread online faster than any disease pathogen; the tech giants who give them a platform; and the advertisers who piggyback on their audiences.

One viral video in particular took on the kind of fingerwagging moral resonance that social media users can’t resist. It showed a young Chinese woman getting stuck into some bat soup. “Revolting footage shows Chinese woman eating a whole bat at a fancy restaurant as scientists link the deadly coronavirus to the flying mammals,” went a headline in the Mail. ‘WHY HAVEN’T YOU DIED?,” the Sun asked, more succinctly. Never mind that the video didn’t come from Wuhan, where bats are not actually much of a delicacy. Or that it is now suggested the first known victims had no contact with the wet market where the virus is supposed to have made the leap to humans. The point wasn’t to share information, but to tap into the fear and xenophobia underlying lots of the coverage. It was to spread judgment of the Chinese people eat icky food! variety.

In reality, the risk from coronavirus remains very low. Compared to the flu, which kills around 400,000 people every year, it is a blip. Unlike coronavirus, there is a vaccine for the flu, yet most of us still don’t bother to get it. We assess the risk and think, nah, we’re grand. Mostly, we are grand: the mortality rate among people infected with flu is about 0.13 per cent. The risk of dying from coronavirus is thought to be around 2 per cent, but this is probably an overestimate. Either way, it’s low.

The same, unfortunately, can’t be said for the risk of contracting mass hysteria from the global pandemic of fake news, conspiracy theories and xenophobic fearmongering.

Minimising your risk of stroke during pandemic is crucial
9