My last child-free Christmas: Next year, it becomes hard work 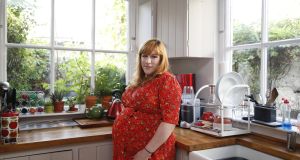 Tanya Sweeney: “I might get away with a non-Christmas or two in the coming years, but after that, I’ve been assured that the festive season becomes hard work.” Photograph: Nick Bradshaw

Of the jumble of memories from childhood, it’s the tinsel-covered ones that seem to stand out. There was the time I nearly broke my back when I cart-wheeled with excitement into a door frame (there was a brand new My Little Pony involved). There was the other time when I dived headlong into the Christmas tree, likely inspired by Tom and Jerry – a moment that resulted in my poor dad, clad only in his paisley Y-fronts, wrestling in vain with the fallen spruce. So much wrapping paper. So many cotton wool-topped nativity models. So many half-eaten carrots, mince pies and half-glasses of brandy carefully misarranged by the fireplace.

It was only years later that my parents told me about their own memories of Christmas Eve, as the servile engineers of this great Santa charade. One nip of brandy for Santa, three nips each for them. As it was the one night of the year that it was completely guaranteed that we’d stay put in bed, they’d even manage to hold parties with the neighbours, and we kids were none the wiser. The picture they took of ‘Santa’ one year tumbling out of the chimney was in fact Joe from five doors down. Keeping up the magic of Christmas was a ceaseless task, but they had their fun, too.

Now that I’m due to give birth in February, this is vitally important to know. I might get away with a non-Christmas or two in the coming years, but after that, I’ve been assured that the festive season becomes hard work. Hunting high and low for the year’s must-have toy. Santa’s grotto visits. Remembering to get gifts for teachers. All the adulting, all of the time.

Let’s pay homage to the one time of year where it’s acceptable to waft about in your house as though you’re a guest on a cruise ship, with added pyjamas

As this year’s Christmas will likely be Brie-free, alcohol-free and hangover-free, I’m already woefully nostalgic for a proper Adulty, Without Kids Christmas.

Let’s pay proper homage to the one time of year where it’s acceptable to waft about in your house as though you’re a guest on a cruise ship. A cruise ship, but with added pyjamas.

First off, non-parents get to revert to teenagehood for Christmas, no questions asked. Something strange happens to your psyche once you pass over the threshold of your childhood home for Christmas; old parent-child dynamics kick back into gear. Christmas isn’t just for children – sometimes, it’s also about being someone’s child.

The muscle memory of the sulky teenager reawakens. Going home for Christmas was the closest thing to becoming 15 again. Even in my 30s, I’d moan about fruit in the trifle and try and hog the remote. There would almost always be a low-grade fight about some chore or another. I’d have to find space in the fridge for my cans of Bulmers (the only time of year I’d drink it, admittedly).

In another fine festive tradition, I’d jam the landline chatting with Karen from school. I’d wander off down the local to meet friends from home that I hadn’t seen since the Christmas before. All of it soaked in glorious seasonal drinks: Baileys, Bulmers, Drambuie, rosé wine, Irish coffees. It wouldn’t be unusual for me to cobble together a Baileys coffee for breakfast, followed by a Mimosa and sausage sandwich chaser. See? Cruise ship carry-on. And all of it sanctioned, nay encouraged, by the spirit of Christmas.

Christmas means going off-grid. Is any of it truly possible if you have a young child that will barely let you go to the toilet on your own?

Obviously, spending Christmas Day upkeeping a light Champagne buzz isn’t the sole preserve of the child-free, but I have been assured that dealing with a baby or small child and a hangover together is pretty much up there with hari-kari. Add in the futile search for batteries, breaking in new bicycles and the like, and perhaps it’s safe to say that my Christmas ‘cruise ship’ mornings are numbered.

Above all else, Christmas means going off-grid from your own life for a day or two. It’s an escape from the exhausting hamster wheel of work, deadlines, bills, routine. The goal is to exert as little energy as you can while doing the most decadent stuff, and being as carelessly extravagant with your time as possible. Lie-ins. Hair masks in the bath. As much telly as your eyes can take; the crappier, the better. Is any of it truly possible if you have a young child that will barely let you go to the toilet on your own? (I’ve heard this is a thing: the endangered solo toilet visit. Petrifying stuff.)

There’s plenty of joy to be wrung out of the sheer joy of children at Christmas. I’m just glad I also have those Bulmers-soaked memories to cosy up to

According to the experts (well, the myriad baby websites online), parents-to-be should spend their last ‘Just Us’ Christmas celebrating life as a duo. “Spend time with friends, because the amount of time you will have for others is sure to dwindle soon,” suggests one. “Focus on your other half as you buy gifts, as you’re sure to get lots of gifts for you and Baby,” notes another. “Savour the moments of snuggling together in front of the twinkling Christmas tree,” says yet another, as though snuggling is a soon-to-be-obsolete pastime.

There’s plenty of joy to be wrung out of the sheer joy of children at Christmas; there’s a trillion-euro global industry out there built on it. And I’m sure finding AAA batteries and half-nibbling a mince pie comes with its own built-in rewards. I’m just glad I also have those Bulmers-soaked memories from days of yore to cosy up to.

Tanya Sweeney’s pregnancy series
Part 1: More chance of Bosco getting pregnant
Part 2: First came the shock, then the advice
Part 3: I’m pregnant and have a glass of wine
Part 4: People have never seen me like this
Part 5: Baby bump makes a woman so visible
Part 6: No more well-meaning advice
Part 7: Facing the financial shock
Part 8: My last child-free Christmas