Coming home for Christmas? Here’s what you missed in 2018

An eventful and heady year: From the return to boomtimes to the Beast from the East 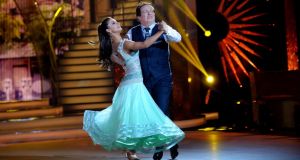 Welcome home! Hope you’re enjoying that lovely glut of time-honoured festive traditions, beloved of those who are just home for a temporary stay at Christmas.

There’s the warm, familial glow of the arrivals hall at Dublin airport (and then the massive taxi queue). A catch up with the Late Late Toy Show on the RTÉ Player (the most Irish thing ever, no more so this year when 10-year-old book reviewer Michael O’Brien expressed extreme disbelief at Ryan Tubridy’s ability to score GAA final tickets). Horsing into the real butter/Ballymaloe relish/batch loaf, because you’ve been putting up with heathen dairy spread and inferior condiments all year. Fielding calls from friends who want to see you in the pub later. It’s almost like Dusty Springfield is sound-tracking the whole shebang and Mammy’s just put the immersion on up to 90, on account of it being Christmas.

Yet for all the traditions that we honour year in, year out, my guess is that coming home once a year from abroad can feel like taking in a strange new place. If the past is a foreign country, the present – in Ireland, if you’ve not been around for a while – probably takes getting used to.

To help you get oriented, here are the revision notes on what you might have missed at home this year.

The boom is back

First things first: you may have heard whisperings that the boom is back. Maybe you’ve noticed your Facebook friends checking into unfamiliar new places such as “the Ivy” (a fancy Molesworth Street shindig, pretty much like its London namesake) or “the Shelbourne Social” (Dylan McGrath’s new joint, offering €120 steaks).

Believe it or not, we are back here again; this time, without the Swarovski chandeliers, the Irish models lying languorously on Lamborghinis in aid of Diabetes Awareness Week and, well, Krystle.

Are your friends in 'two-car families' again? Has your best friend buggered off to New York for the weekend to pick up a few 'last-minute bits'?

Maybe the bloodless, gauche Celtic-Tiger vibes didn’t sit well with you the first time round, and drove you to seek out new shores. Perhaps the post-boom bust is the reason you now live abroad. Either way, I’m curious to see what you see when you come home and look around at 2018 Ireland. Are your friends in “two-car families” again? Has your best friend buggered off to New York for the weekend to pick up a few “last-minute bits”? Is your mum on the lookout for an “investment” Orla Kiely handbag? (Fine, bad example). Does it all turn your head? Or your stomach?

Speaking of, you can’t have failed to notice increased chatter about our homelessness crisis, even at a geographical remove. The figures of those living rough or in emergency accommodation in Ireland have increased by 17 per cent since this time last year. Thinking of coming home in the coming months? Be sure you have a handy few grand if you’d like to rent in the capital. A shed in Swords (furnished, mind!) was up for rent under the guise of a “cosy wooden chalet” at €765 a month this summer. More recently, you could have availed of one half of a bunk bed in a Capel Street property for €470 a month, advertised in November on Daft.ie.

According to Leo Varadkar though, there’s not too much to worry about, fiscally speaking. The Irish economy is “so strong”, apparently, that not even the prospect of a hard Brexit can take the giddy out of its gallop. In fact, there’s so much money around that Leo goes to Kylie Minogue gigs and pays. For. His. Own. Drinks. He has the receipt and everything.

The weather (it was bound to come up)

We also went wild for weather in 2018. Not just “let’s maybe build a snowman” enthusiastic, but like pure wild for it, watching it on rolling news for days at a time. We’re all boned up on low-pressure systems, naming hurricanes and snowfall inches. I know freak weather phenomena probably also occur where you are… but do the Canadians or the Europeans treat a snowstorm as another opportunity to stage a sequel to Christmas? Anyway, that’s exactly what happened when Storm Emma and the Beast from the East landed in February and March. Most of the country was on lockdown, and a boozy one at that.

People were so worried about hunger (or worse, running out of wine) that the shelves in the local Spar or Centra stores were Communist-Russia bare. Some of us even had to make do with Battenberg cake and non-chocolate Kimberleys. Truly, the worst and oddest of times. All told, we took Met Éireann’s weather alerts very seriously, probably for the first time. At one point we weren’t allowed to leave the house, much less go to work (I know, terrible).

If snowstorms in March seemed unusual enough, it was nothing compared to 32 degrees in July. And again, the humble old Met Éireann reports were watched by million-strong audiences night after night (that’s right, the weather presenter are now rockstars).

There’s every chance you are used to tropical climates in your new home, but not here. In Ireland, 2018 will be the long(ish), hot summer that an entire generation of Irish people will talk about for years to come. They’ll regale people in the future about the sunburn, the hosepipe ban, the World Cup matches in beer gardens, the rush to Argos for a room fan and the way the entire national mood lifted. In much the same way that the balmy summer of 1976 spoiled the Irish person’s notion of what constitutes a “decent heatwave”, we are probably fated for the next few years to bemoan the fact that Leaving Cert weather is “only” tipping the mercury at 20 degrees.

We’ve had plenty of high-profile visitors to Ireland in 2018, too. Pope Francis visited in August, but that pesky unpredictable weather kept many away from his Phoenix Park mass (152,000 attendees, compared to Pope John Paul II’s 1.2 million fans back in 1979). We’re still getting great mileage out of the collapsible papal chair (€18.95).

Prince Harry and Meghan Markle enjoyed a “mini-moon in Dublin”, and what an action-packed itinerary it was. There were visits to the Book of Kells at Trinity College, Croke Park and the EPIC Irish Emigration Museum. We’re not great on sums, but there was even speculation that their child, due in the spring, might have even been conceived in Ireland. Croker will do that to a couple.

Certainly, there is likely to be a lot of babies named Aaron (Gillane) or (Shane) born nine months from August 2018, after Limerick beat Galway in the GAA Hurling final at Croke Park (that’s right, Kilkenny were fairly conspicuous by their absence from the big game). Last month, hurling and camogie were officially recognised by Unesco as protected cultural activities. Yes! Even outside Kilkenny!

If that’s not action enough, there was a presidential election that eventually went a bit Wacky Races, thanks to a few Dragons (with one in particular bolting out of nowhere on account of his supposed “truthtelling”), Marty Morrissey cutting a swathe on Dancing with the Stars, a stunning Rose Of Tralee winner (Kirsten Mate Maher) who was allegedly subjected to racial abuse in the days after her momentous win, a 16-9 win over the All Blacks at the Aviva Stadium.

Oh, and Sharon Ní Bheoláin has been replaced on the Six One News by Keelin Shanley and Caitríona Perry – the Washington correspondent who was awkwardly singled out by Donald Trump for having a “nice smile”.

All in all, an eventful and heady year. What delights and drama await us in the next 12 months remain anyone’s guess. One thing’s for sure though. In 12 months’ time, you’ll still be talking about property in the pub. Consider yourself warned.

What is the best exercise for you?
10