In Conversation: Graham McLaren and Neil Murray of the Abbey Theatre 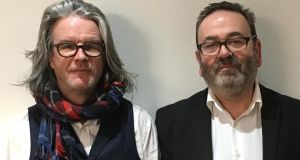 Graham McLaren and Neil Murray are directors of The Abbey Theatre

Neil: I bought a Roddy Doyle book for my daughter.

Graham: I’ve been buying Christmas presents which I will not reveal.

Graham: A friend from Glasgow sent me a playlist of songs because he misses me. One song in particular has always moved me, a live version of the Christy Moore song Viva la Quinta Brigada recorded in Glasgow. There’s a line about the bishops from the pulpits encouraging people to fight with the fascists, and you can hear a woman’s voice in the audience shout in perfect timing “f*** that!” That sense of civic and social camaraderie moved me to tears about two hours ago.

Graham: We are criers.

Neil: The last thing I specifically remember crying at was a bit of pride. My sister, who is an academic, helped with some research on a BBC documentary called School looking at the day-to-day battles of running a school in the west country in England. There was a particular child they were following, she was having a really difficult time but was stoical about it, and I cried at that.

Graham: I love St Andrews in Scotland. Green and blue.

Graham: I don’t play golf and I don’t really swim.

Graham: Everything and nothing.

Neil: A whole raft of opportunity.

Graham: What do your kids owe you? Are you the child or parent in that question?

Neil: I know what I owe my parents. I don’t know…

Graham: You wouldn’t want them to owe you anything. I feel I owe my parents my everything...

Neil: As a child you have to receive it and as a parent you have to have it – a sense of absolute certainty of what you’re doing is right for your child. It won’t always be.

Graham: As a parent, the choices you make for your kids will live longer than you will.

What is your favourite street?

Graham: I like sandstone and granite. I’d be inclined to say something like the Royal Mile in Edinburgh.

Neil: A Prayer for Owen Meany by John Irvine.

Graham: I’ve read the Complete Works of Shakespeare more times than I should have, probably.

Neil: A youthful indiscretion following a night at the Hacienda nightclub. I tried to let myself back into my flat through a first-floor window.

Neil: I fell spectacularly backwards. I landed on the balls on my feet and had crush fractures on my leg, but if I had hit the wall with my back, that probably would have killed me.

Graham: Driving a car once when a car came right across the dual carriageway. I had to go up on the grass verge and miss three or four other cars and come back down. Things went into slow motion. I wrote off the car. My father died in a car accident on a dual carriageway when I was nine. I remember the pause, that I was 38, and I was conscious that my father was 40 when the same thing happened to him.

What do you wish you studied more at school?

Neil: I really regret that I don’t speak Welsh, which is my own language. It was resisted at school. The Welsh language is thriving. To hear Welsh spoken in Cardiff and Newport where I’m from is both glorious and heartbreaking because I can’t speak it.

Neil: I don’t think I have one.

Graham: You don’t believe in any of that stuff.

Graham McLaren and Neil Murray are directors of The Abbey Theatre