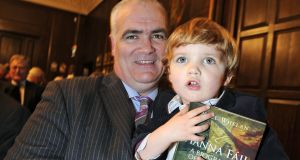 At the launch of his 2011 book, Fianna Fáil: A Biography of the Party. Noel Whelan, with his son Séamus, then aged 2. Photograph: Dave Meehan

Noel Whelan was a remarkable individual who combined a range of successful careers in his relatively short life. A political campaigner, a barrister, a newspaper columnist and pundit he carried out all his activities with professionalism and good humour which endeared him to people from all walks of life.

Probably his proudest achievement was his role as a strategist in the campaign for marriage equality in 2015. Combining his deep knowledge of politics with an insight into the thinking of middle Ireland he was able to steer the campaign towards an overwhelming victory nobody would have believed possible even when the referendum was called.

He ensured that the campaign focused on gentle persuasion of those who might have doubts about the wisdom of the constitutional change rather than presenting a strident demand that might have prompted a more divisive and unpredictable debate. He brought the same understanding to the campaign to repeal the eighth amendment on abortion last year.

His newspaper columns for The Irish Times displayed both his love of politics and knowledge and understanding of the way political decisions are made. He was never dismissive of those with whom he disagreed but instead provide sage advice for all who wished to hear it. He established a wide and devoted following among Irish Times readers since he started contributing to the paper in 2003 with a weekly column since 2006. As well as writing for this newspaper he was a regular pundit on radio and television and published a number of “Tallyman” guides for a succession of general elections.

His media career was in addition to his “day job” as a highly successful barrister. He did a lot of work as a prosecutor for the Sate and had to deal with a number of horrific sex abuse cases which had a profound effect on his thinking. In recent years he was one of the key movers behind the establishment of the Kennedy summer school in his native Co Wexford which explored the Irish American relationship in its many manifestations.

Noel Whelan was born in November 1968. He grew up in Ballycullane in Co Wexford, one of a family of 12 children where he attended the local national school. His father Séamus was a Fianna Fáil councillor and Noel was bitten by the political bug at an early age. After school he went to University College Dublin where he studied history and politics and he graduated with an MA.

Following graduation he got a job as an official in Fianna Fail headquarters and his talent was quickly spotted. He was promoted to be a political adviser to Tom Kitt, who was minister of state for EU affairs from 1992-94. He stood as a Fianna Fáil candidate for Dublin South East in the general election of 1997. When he failed to get elected to the Dáil,  he made an unsuccessful attempt to win election to the Seanad the same year. He was studying at the King’s Inns at the time and was called to the bar in 1998.

While he began to build a legal practice he remained engaged in politics. Fianna Fáil leader Micheál Martin recalled that Whelan understood and knew every constituency and local electoral area across the country and could, off the top of his head, remember quotas from an election held back in the 1980s.

This detailed knowledge of politics prompted him to write a series of books about politics and elections beginning with The Tallyman’s Guide to the local and European elections of 1999. He followed that up with a legal textbook, called Politics, Elections and the Law, a year later and subsequently produced guides to a succession of elections.

During that period he  married  Sinéad McSweeney, who worked as an adviser to Fianna Fáil minister Michael Woods and later to attorneys general David Byrne and Michael McDowell. She subsequently became head of communications for the PSNI and An Garda Síochána, before becoming vice-president of public policy and communications for Twitter in Europe. The couple had a son Séamus, who is now 10 years old.

As a pundit,  Whelan was one of the first to predict the scale of the meltdown that was going to hit Fianna Fáil in the election which took place in the aftermath of the EU/IMF bailout of November 2010. Some of his friends in the party were reluctant to accept the inevitability of the outcome and did not thank him for his predictions.

He moved back into political activity in 2013 by taking a lead role in the referendum campaign for a No vote to the Fine Gael/Labour Government’s campaign to abolish the Seanad. Working with fellow barrister and former PD leader Michael McDowell, against whom he had run for the Dáil in 1997, and the late senator Feargal Quinn, they mounted an effective campaign which changed people’s minds. The outcome was a shock defeat for the proposal which opinion polls had indicated would be carried comfortably.

That referendum victory prompted him to direct involvement in the campaign to change the Constitution to provide for gay marriage. It was an issue on which he felt deeply and he threw himself into the task with enthusiasm. His knowledge of electoral tactics was a vital ingredient in the success of the Yes vote. He brought the same energy and enthusiasm to the campaign to repeal the eighth amendment last year.

After the success of that campaign he briefly toyed with the idea of running for the presidency. However, once Michael D Higgins had declared his intention of seeking a second term he decided not to throw his hat into the ring. In a tribute, President Higgins said: “Propelled by his social justice values, Noel was not only a commentator but a driving force in some of the most important political campaigns of recent times.”

Earlier this year, Whelan was diagnosed with a serious illness but continued to write his column for The Irish Times, the last of which appeared a week ago.

My biggest lockdown mistake? Relying on TikTok as a co-parent
4

How safe are beauty treatments? A spa session reveals a new world
8