The writer/star of hit show GameFace is proud of her Irish roots. Just don’t call her Roy-sin 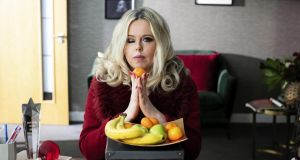 Roisin Conaty as Marcella in GameFace: “I think I’ve got an Irish sensibility for language – I like how people talk.”

Row-is-in. Roy-sin. Rosh-een. Roy-shin. Ros-in. You get the impression that Roisin Conaty has been introduced in all manner of ways in her lifetime, but that’s an occupational hazard if you’re a London-born panel show favourite, stand-up comedian, actor and scriptwriter with Irish parents.

“I still identify as Irish,” she says, pulling on a cigarette on a rooftop terrace in the Soho sun. “But I’m a Londoner too. It really is a great place to grow up. I grew up on a council estate and I met everyone from everywhere, and had food [from] all over the world before I was 10. It means I can travel the world and I don’t feel like it’s a strange place. There’s poverty and racism here, of course, which makes you wonder if it’s just nostalgia. But as a country, I feel more Irish than British.”

We talk about the woes of contemporary London, though she still manages to find a bright side. “At least everyone is engaged with politics now,” she says. “It’s not like in the ’90s in the credit rush era when you were happy spending money and like, ‘and who’s that MP?’”

She’s a keen listener, and before she smokes, she checks, then emphatically double checks, if I mind

Conaty was born in Camden 40 years ago to parents who met in London; her late father, who worked for Aer Lingus, was from Co Cavan, and her mother, a nurse, was from Co Limerick, where she was one of 12 sisters. Growing up with regular visits to Ireland, Conaty’s Irish side helped shaped her outlook.

“All my mother’s sisters are matriarchs – there are big characters and opinions. Watching them together is like a play, you have all these different takes on the world across different generations . . . My mum is hilarious. My dad was very, very funny too,” says Conaty, who won best newcomer at Edinburgh Festival in 2010 after being spurred on by her father’s sudden death. “I think I’ve got an Irish sensibility for language – I like how people talk. I’m not saying I’ve got it, but I’m obsessed with the way they use language, like they use a swear word very poetically.”

That’s certainly carried through, as shown in the second series of GameFace, the Channel 4 sitcom in which she writes and stars. In the first episode alone, there’s not one but two expertly-placed C-words. The night before we meet, at its premiere around the corner, director Andrew Chaplin explained that such profanity needs sign-off from a top dog at Channel 4 and is restricted in number. It’s affectionately known as “the c**t count”.

I meet Conaty days before it’s due to air, while she’s still editing the rest of the episodes, but her hectic schedule isn’t obvious from her cool demeanour. It takes no time to realise she’s an empathic soul. She’s a keen listener, for example, and before she smokes, she checks, then emphatically double checks, if I mind.

I ask if there’s any concern that GameFace has been scooped up in the whirlwind of female-fronted shows at the centre of pop culture – from Fleabag to Derry Girls. She answers with the kindest tone of negative.

“No, I think it holds its own,” she says nicely. “The shows you’re referring to are brilliant and there’s nothing that I don’t want to be linked to. I think it’s frustrating for all of us that we get compared to each other like a genre, without considering the detail. Not seeing differences is part of the problem. I suppose the reason behind it is the lack of female shows, and it’s the same with people of colour.

“There are so many more stories of women of different ages, and colours, and abilities, that we just haven’t seen. We’ve barely scratched the surface of a version of women on screen.”

It’s true that we’re still finding new aspects of female lives reflected back at us, and a notable case in point is the sight of a period leak in the second episode of the new series, which resulted in a few gasps in the screening room last night.

“I was so stunned at the reaction, especially as it was a comedy screening,” she says. “I presumed everyone had seen it at some point, on a sheet, or if they have sisters. Because it’s so common in our world. I guess there’ll be lots of Twitter trolls once it airs: ‘How dare you bleed!’ ” she laughs.

But GameFace (or “FaceTime, as my mother calls it”) isn’t just about shock value. Its beauty lies in the real-life predicaments of the hot mess that is Marcella, which swing from outrageously funny to weighty in a screentime second. The reception from the first series – it was E4’s biggest comedy launch since 2013 – was enough to get it shown in the US on Hulu and upgraded to Channel 4 for its second series.

“We met at sixth form college. And we’re not a couple! That’s the thing. I’d love it if we were and I was gay,” she says, before reining it in lest her words be taken the wrong way.

Given that GameFace is partly about single life, I wonder if she’s still single herself?

“I’m not going to say,” she explains. “Only because if I say it, then I’d have to change it, so it’s one of those things I’ve decided I’m not going say, especially because then I start confessing lots of things.”

She recently returned from Kilkenny Cat Laughs Festival, which gave her a chance to take a break from GameFace and reconnect with her comedian friends. “As soon as I got to the hotel I saw David O’Doherty, Nish Kumar and Ed Byrne hanging out playing frisbee over lunch. I was like, ‘My people!’ I missed my guys.”

You might also catch her on a panel show, particularly 8 Out of 10 Cats Does Countdown, and she’s due to reprise her role as the “sex worker” in a second series of After Life, Ricky Gervais’s poignant Netflix comedy about a recent widow adjusting to his new normal.

Most excitingly, there’s a US-UK film deal with Fox Searchlight in the works, though she’s keeping the specifics close to her chest, other than to explain that she’ll be concentrating on it for the rest of the year. How does writing a film compare with a sitcom?

“I find it easier, though let’s see how it comes out first,” Conaty replies. “With a sitcom, you have to have a beginning, middle and end six times, but with a film it’s just one story. Much of it is similar, though, with the characters, premise . . . and then holding your nerve when you think you can’t do it.”