‘Munster didn’t beat the All Blacks in 1978. This video proves it’

Ross O’Carroll-Kelly: What the fock? Did the old man pay someone to fake a video? 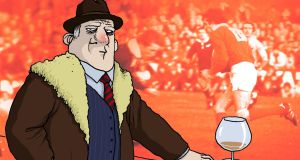 Charles goes, 'this Saturday’s match against the world famous All Blacks is, I think, an opportune moment to correct, once and forever, a grave, historical, sporting injustice'.

The old man asks me what I’m doing on Thursday night. He goes, “I’m having a bit of a soirée, Kicker! I’ve booked the famous Stephen’s Green Hibernian Club for a private dinner to celebrate Ireland’s relationship with the – inverted commas – Land of the Long White Cloud!”

I’m obviously there, “The Land of the what?”

He goes, “I’m talking about New Zealand, Ross! On Saturday, we are World Cup opponents, but let us not forget that we are also friends with much in common – our population size, our landscape and the friendliness of our peoples!”

“And this affects me how exactly?”

“I’ve got those 10 cases of Framingham’s F-Series Riesling Trockenbeerenauslese that I picked up in Rotorua during the 2011 World Cup! As I said to your mother, they’re not going to drink themselves! Plus, Hennessy has the full carcass of a Booroola Merino lamb in his coffin-style freezer! He strangled the thing with his own hands – just after he hit it with the Bentley while driving over the Wicklow Gap! An act of mercy – poor little chap! Still, if eating his poor, broken body, medium-rare, helps to solidify the relationship between the country of his birth and the country of his forebears, then I’m sure he’d agree that his sacrifice will not have been . . . etcetera, etcetera!”

I forget sometimes that a lot of people actually like my old man? Fock knows why.

“I thought I’d invite a couple of hundred of my closest friends and acquaintances along! Michael McDowell obviously! Dick Spring! Hooky and Popey! Good old Gerald Kean! Thought I’d ask the New Zealand ambassador to Ireland – maybe even the entire staff of the embassy! They’re on Merrion Row, don’t you know!”

“That’s wonderful, Ross! And bring your chaps as well, won’t you?”

So Thursday night, I rock up with Oisinn, Fionn and Christian in tow. The place is, like, rammers. We sit at our table and various friends of my old man swing by to ask me for my thoughts on the match. I tell them all the exact same thing. Ireland will beat the All Blacks. End of analysis. It seems to send everyone away hopeful.

Anyway, the dinner is going well. We’ve, like, finished our mains and we’re waiting for our desserts when, all of a sudden, my old man steps up to the mic to make what everyone presumes is going to be one of his usual boring speeches.

He goes, “Mr Ambassador, friends and colleagues, ladies and gentlemen . . .”

He obviously doesn’t mean that literally – there are no women here.

He goes, “Thank you all for coming tonight! I want to say a special thank you to my legal adviser and long-suffering golf portner for supplying the meat for this evening! Those of you who spotted Bridgestone tyres morks, especially on the shoulder cuts, may have come to certain conclusions as to its provenance – and you’d be absolutely right!”

Everyone laughs. I forget sometimes that a lot of people actually like my old man? Fock knows why.

But that’s when my old man’s facial expression suddenly changes. “What I haven’t told you yet,” he goes, “is that I had – let’s just say – an ulterior motive in inviting you here tonight.”

The room suddenly dorkens as all the lights are dimmed. A projector screen comes down on the wall beside him. On it, there’s a rugby match that looks like it happened in the olden days – and it’s, like, paused.

He’s there, “This Saturday’s match against the world famous All Blacks is, I think, an opportune moment to correct, once and forever, a grave, historical, sporting injustice! Some of you will be aware that I have recently become a founding member of the Society of Munster Truthers – an organisation that believes that province’s so-called victory over the All Blacks in 1978 was in fact a hoax!”

That doesn’t go down well. People are either groaning or actually shouting, “Give it up, Chorles!” and, “I think we all know what this is really about!”

Yeah, no, he’s had a bee in his bonnet ever since Munster Rugby turned down his offer to buy the naming rights to Thomond Pork. My old man is nothing if not a petty and vindictive man.

Others aren’t happy bunnies, though – especially the ones who come from down that way. They’re going, 'It’s fake news, boy! It’s fake news!'

He goes, “Please, my friends, hear me out! I think all of you will join me in questioning the official narrative when you see what I am about to show you!”

Christian goes, “What is it, Ross?”

The old man’s there, “It has long been rumoured that, in the final stages of the match, the All Blacks scored and converted two tries to draw the game, although these have been edited out of the official footage! Those of you who’ve watched it as closely and as many times as I have will be familiar with the subtle jumps in the footage!”

There’s, like, boos throughout the room. People stand up from their tables with the intention of walking out.

The old man goes, “So I offered €1 million – a bounty, if you will – to anyone who could provide me with the missing footage! And now – at last – I have it!”

Oh, that gets their attention. Everyone’s like, “What did he say?”

There’s suddenly, like, total silence in the room. Hennessy presses play and we watch the footage, which – I’m going to be honest – seems to show the All Blacks scoring then converting a try, then gaining possession from the restort, then scoring and converting another try.

You could hear a pin drop when it finishes.

Then someone shouts, “Someone’s doctored the footage! That’s from another match altogether!”

It’s a Cork accent – no surprise there.

Fionn turns around to me and goes, “What the fock? Did your old man pay someone to make a fake video?”

If he did, they did a very good job. I mean, most people in the room seem to agree that the footage looks real – as in, like, actual?

Others aren’t happy bunnies, though – especially the ones who come from down that way. They’re going, “It’s fake news, boy! It’s fake news!”

The old man just goes, “Some people can’t handle the truth! But this video proves it conclusively! Ireland may well beat the All Blacks on Saturday. But Munster certainly didn’t in 1978!”