I've never had a vegetarian meal that I like. They leave me feeling pukey

Seán Moncrieff: Climate change puts me in a bad mood; not just for the threat to our world, but also because it will constrain my life 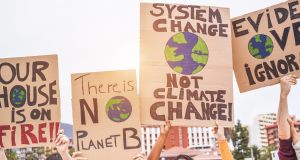 Climate change protest. The earth has run out of the resources to maintain our kind of lifestyle so we’ll all have to make sacrifices. Photograph: iStock

I’ve been to a few vegetarian restaurants. I’ve had vegetarians serve me meals that they promised would rock my culinary world. They didn’t. I’ve never had a vegetarian meal that I liked. They always leave me feeling a bit pukey.

Go on a march or express an opinion online and soon enough you’ll be called a hypocrite for owning a phone or a car or for ever having been on a plane. Only the purest of the pure should be allowed speak up. But once all the “sinners” have been weeded out, there’s no one left.

There are many impediments to decisive action on the climate. Political cowardice, money, bogus science, stupidity and barefaced lies. But another rather large complication seems to be a tendency to view all this in terms of fairness.

The US and China should do more, not us. The Green Party was in the coalition that bailed out the banks. Only the rich should pay a carbon tax. Teenagers should shut up about the environment because they are messy (seriously, I’ve heard that one).

The whataboutery stems from fear. Like it or not, the necessary changes will affect all our lives. I don’t like it. Perhaps there are a few self-flagellators who do, but the only rational reaction to how our lives will transform is to be grumpy and resentful. That’s perfectly reasonable.

This is nothing to do with virtue. If we wish to preserve the planet, if we wish to survive as a species, then we face an enormous but essentially practical problem. We don’t have to like the solutions. It would be a bit weird to like them.

Climate change puts me in a bad mood for several reasons. Not just for the threat to our world, but also because how it will constrain my life.

Despite my senior years and overwhelming cynicism, I still get a tingle when I get on a plane. It doesn’t matter where I’m going – though obviously I prefer some places over others – it’s the very idea or soaring into the sky, of exploring the globe. But thanks to climate change, my opportunities to do that will in the future be greatly constrained, even extinguished. The thought of that makes me feel itchy, even a little trapped.

I love a steak. Even as things are now my steak-eating opportunities are few due to daughters one, two and three being vegan (the name Linda McCartney comes up a lot at dinner time).

Yes, agriculture is a major contributor of CO2 and will have to change. Yes, that means meat eating may have to become rare or be done away with altogether. I accept all that. But I don’t like it. (Philosophically, I don’t buy the cows-are-people too idea. As long as the animal was grass fed and not treated cruelly, I’m happy to tuck in.)

So, here’s me in my happy place; on a plane, with an unhealthily large glass of red wine, eating a steak. Afterwards, I’ll probably have a cigar.

I don’t like vegetarian food, but I’ll eat it. Because that’s what you do when you’re a grown-up.