Dust off the savarin tins for these orange beauties 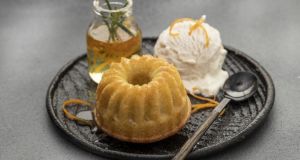 Over the years at the cookery school, we’ve built up an impressive collection of cake tins. From the every day loaf tins and simple sandwich cake pans to specialist tins in every shape and size.

Madeleines are baked in their shell-shaped moulds. Rum babas have their own individual ring-shaped tins. Brioche loaves look wonderful baked in their traditional fluted tins. Then there are the almost crenellated Bundt tins, the ridged savarin moulds, and the list goes on.

A traditional savarin is made with a yeasted dough and soaked with a sweet syrup. Although it is undoubtedly delicious, it does take a little while to make, as the dough must be left to rise twice before it is baked.

This lookalike savarin recipe uses a non-yeasted cake mixture, so it can be made and baked in short order, then left in the refrigerator overnight to soak up the syrup.

Baking the cakes in traditional savarin tins makes these sweet sticky orange-scented cakes look so pretty. Even in a cookery school there is a limit to how often we make savarins, so it’s great to have another reason to use the tins.

The shape of the tin doesn’t just look pretty though. The ring shape means the syrup soaks evenly into the cake from all sides, so there is no dry centre. I call these tea cakes, but they also make a great pudding if you are entertaining.

All the work is done the day before, and the generous dousing of syrup ensures they stay moist and sit happily in the fridge until you are ready to serve them. Adding a dash of Sauternes, sweet dessert wine, or Cointreau to the syrup will glam them up even more.

For the orange syrup:
75g sugar
75g water
1 cinnamon stick
Zest and juice of an orange

1. Preheat an oven to 190 degrees Celsius fan, or equivalent. You will need a tin with eight individual savarin hollows.

2. In a saucepan, melt butter over a low heat. Set aside to cool to room temperature.

3. In a large bowl, mix together the flour, cinnamon and sugar until fully combined.

4. Using an electric whisk, mix in each egg simultaneously with a third of the cooled melted butter, and continue in turns until fully combined. Mix on a high speed (getting as much air in as possible) until it is the consistency of a pale, thick batter. Add the orange blossom water.

5. Transfer the batter into a piping bag.

7. When ready to bake, fill each savarin mould to two-thirds of its capacity.

8. Bake on the middle shelf of the preheated oven for 30 minutes or until the cakes are risen, and crisp golden brown in colour.

9. Once baked, remove from the oven and allow to cool for 10 minutes. Release them from their moulds, upturning so the savarin pattern is on top.

10. For the orange syrup, bring the sugar, water, orange zest and juice and cinnamon stick to a boil. Reduce the heat and simmer for five minutes until slightly syrupy.

11. Drizzle one or two teaspoons of the syrup over each cake as it is cooling. Cover and leave the cakes in the refrigerator overnight, to soak up the syrup.

12. Serve the cakes at room temperature or slightly heated, with sweetened cream or ice-cream and a drizzle of extra syrup if any remaining.

Variation: You can vary the flavour by adding Maraschino cherries to the batter and pouring cherry syrup over the cakes.