How crisps are made, from the field to the packet

Is your favourite crisp properly crispy or is it woolly and soft, getting stuck between your teeth?

Irish brothers Sean and Martin Clinton have set out to make the best crisps when they dreamt up Clintons Crisps 3½ years ago, and they’re so convinced they’ve done it that they’ve put “world’s best crisps” on the front of the bag. Video: Alan Betson 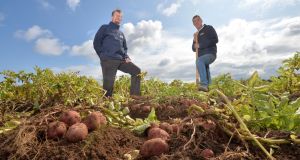 What’s your favourite crisp? Is it properly crispy, crunching into a hundred tiny shards when you bite into it, or is it actually quite woolly and soft, folding in on itself like cardboard and getting stuck between your teeth?

Is it greasy, leaving a slick coating on your tongue, or dry, making you reach for a drink to wash down powdery slices of potato? Do you like the flavour dialled up to the max, like a head-blowing cider-vinegar and Irish sea salt, or more of a subtle sprinkling, like those continental Europeans with their ready salted and paprika only, thank you very much?

Whatever it is, an educated guess might conclude that your favourite crisp is probably Irish, because few do it better than we do - this is, after all, the spiritual home of the potato. Think of the rows over Irish Tayto versus UK Tayto, Irish King versus UK King. We’re just really good at crisps. So wouldn’t it make sense that if the best crisps in the whole world were going to be made anywhere, it would be here?

Big talk, but that’s what brothers Sean and Martin Clinton set out to achieve when they dreamt up Clintons Crisps 3½ years ago, and they’re so convinced they’ve done it that they’ve slapped “world’s best crisps” on the front of the packet.

Clintons have been farming potatoes in Skerries, in north Co Dublin, since the 1700s. Martin Clinton took over from his father, who took over from his, while brother Sean went to college to study food science. Growing up the boys were put to work early.

“Farm children don’t have summer holidays,” says Sean. “We were out picking potatoes from morning till night while everyone else was having fun.” “You used to hide when they were calling us!”, exclaims Martin, both men bursting into laughter. They joke about how farming children were only born at certain times of the year, approximately nine months after the harvest was finished.

Ironically for someone from a potato-growing background, Sean ended up working in crisp factories, for Perri, Largo Foods and Intersnack, making Hunky Dorys, Tayto, O’Donnells and everything in between. He loved crisps and understood from potato growing, cooking and flavouring what was needed to make what he considered a world class version. But time and time again saw small, exciting brands both here and abroad, bought up by big snack companies, and inevitably decline in quality. He saw a gap in the market.

Convincing Martin was the next hurdle. “Farmer’s don’t like change,” laughs Sean. “I had to convince him it was worth the risk to stop growing potatoes for the plate, and start growing ones that make great crisps.”

Martin says he was eventually persuaded because making a living from farming is getting more and more difficult each year, and he wanted to leave behind a viable business, as well as keeping the centuries old tradition of Clintons growing potatoes alive for generations to come. He has three sons, the youngest of which is the only one interested in taking over the farm (a stroke of good luck - a farm divided by three isn’t much of a farm) and adding in an additional business that uses the raw product and caters to the growing artisanal food movement seemed like a smart move.

Potatoes suitable for making crisps are different to potatoes for mash or chips. They need to be low in sugar to remain stable over long periods of time. The Clintons use varieties like Lady Rosetta, Amarilla and Kibitz, grown in Skerries fields which look as if they drop off into the Irish Sea below. Potatoes can only be grown in a field one out of five years, so each year they swap fields with their neighbours for crop rotation. Everyone knows each other around here.

When it came to production, Sean knew what he wanted. The crisps would be skin on (that’s where 70 per cent of the nutrients are), and cooked in Irish rapeseed oil. He wanted a thick crisp (known as a kettle chip), and it had to be truly crispy. Flavourings were key, and he spent over a year travelling and taste-testing across Ireland and Europe before settling on the recipes for their mature cheddar and red onion, seared steak, and classic sea salt and vinegar flavours.

Each week he tastes crisps from around the world, scoring them in a number of categories, always wanting to see if anyone is doing anything better than they are. So far, he says, they aren’t.

“We’re not trying to make a health food, but crisps are usually shared. It’s nice for them to be inclusive,” says Sean, referring to the fact that all of their products are naturally gluten-free have no cholesterol, and the salt and vinegar and steak flavours are vegan. Steak-flavoured crisps that have never seen meat? Sean says they don’t need to, that the same flavour compounds can be found through barbecuing vegetables.

He also thinks they shouldn’t be lumped in with “junk food”.

“Our crisps are as natural as crisps can get. The majority of the ingredients are coming from Dublin, there are no E-numbers or additives, and we make them by hand in very small batches. They also have less than 30 per cent fat, whereas commercial crisps tend to have 33-38 per cent. Most people don’t eat crisps every day, they’re a treat, so when you do treat yourself, why wouldn’t you have the best?”

When he says small batches, he means it. For their sharing bags (100g) only 48 are made in each run at their Ashbourne, Co Meath factory, taking eight minutes in total. Each batch has to be tested and tasted along the way – tough job. The potatoes also have to be tested in advance, and the recipe for cooking changes depending on moisture levels and sugars.

The process begins with potatoes getting loaded into a drum and spun around on something similar to a giant emery board to take off excess skin or imperfections. Once smooth, they travel up a conveyor belt and into a huge weighing scale that stops when it reaches the required weight. At the same time the rapeseed oil is heating in what looks like an ogre’s bath. Once it reaches the right temperature, the giant weighing scale starts spitting out potatoes, which go flying into a circular machine, cutting them into slices between 50-70 thousands of an inch, and spinning them out and into the oil below like tiny frisbees.

The potatoes bring the temperature of the oil back down, and steam rises as the moisture evaporates. They had extractors fitted to let the steam out, but neighbours complained the industrial estate smelt like a fish and chip shop, so down they came.

It gets hot in here. Once the oil gets back up to the original temperature, a giant sieve starts to lift the crisps out and onto another conveyor belt. Here there is some manual sorting - anything green or too brown gets discarded - and a crisp is taken off, ground down to dust and taken to the lab for a moisture check. Too high a reading and the product won’t be shelf-stable.

After this comes what will from now on be referred to as the flavour tunnel. The crisps have risen up a conveyor belt and wait in a clear plastic box. Once the lab results are clear, a button is pressed, the flavour tunnel starts to spin, and an airborne mist of salt and vinegar shoots up your nose. It’s the best possible thing you could have shoot up your nose.

The crisps make their way down, jumping into the flavour tunnel and dancing along it, looking like they’re having the time of their life – and for the record, there is no crisp as delicious as one still warm from the fryer that’s been given a salt and vinegar coat just seconds beforehand.

Out onto another conveyor belt and up a track into a sorting machine, which weighs out a perfect 40g or 100g depending on the size of the bag, and drops them through a chute into the packaging below. Bags come on a big roll of shiny paper, clamped shut on three sides before the crisps drop in. Then the final side is sealed, a best before date is stamped on the back, and onto another conveyor belt before one of the three staff on the floor packs them into cardboard boxes. Forty-eight bags, then it starts all over again.

The Clintons have put their life savings into the crisp business, and say they haven’t had a day off in 3½ years, when this idea first started to take shape. The hand-cooked crisp market is growing in double digits each year, and if they can take just a small part of it they will have done what they set out to do – create a viable business that their children can one day take over, that will keep the family doing what they’ve done for generations – growing potatoes in Skerries. Selling out to a bigger company is not part of the grand plan.

This year they were accepted onto the Supervalu food academy, and are now stocked in over 30 Supervalu stores, as well as Donnybrook Fair, and they’re starting to appear in independent shops through their national distributor. Once Ireland has been conquered, they’ll look at the UK.

Since visiting the factory I’ve been doing non-stop taste tests on friends and family: everyone from the “I’ll eat them if they’re in a bowl in front of me at parties” to the full-blown crisp obsessive, who’s No 1 dream in life is to visit a crisp factory. All bar one has had the same response: “These are the best crisps I’ve ever had.”