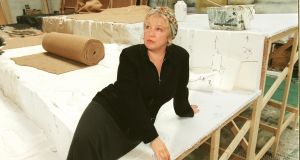 Abbey Theatre set and costume designer Monica Frawley at the construction of the set for By the Bog of Cats. Photograph: Frank Miller

The highly talented and award-winning costume and set designer Monica Frawley has died of pancreatic cancer following a year-long illness. Frawley, who was fearless and passionate about her work, was a sought-after theatre designer in Ireland and Britain. She designed costumes and sets for several Irish theatre, dance and opera companies and worked on the premiere productions of Irish playwrights including Brian Friel, Tom Murphy, Frank McGuinness and Marina Carr.

Renowned for her strong visual imagination and technical ability, Frawley combined the skills and talents of an architect, designer and artist in everything she did. Her indomitable spirit led her to produce surreal abstract sets that audiences remembered years after seeing the production. For example, her stage design for Marina Carr’s By the Bog of Cats was a vast frozen carved bog sloping down like a crater in the moon. And, she transported mud to the Perth International Arts Festival in Australia for Patrick Mason’s Abbey Theatre production of John Millington Synge’s The Well of the Saints. For Frawley, nothing was impossible for art’s sake.

Her costumes were magical surreal affairs which drew on her rich knowledge of international art, theatre and design

One of the highlights of her career was when she designed costumes and sets for The Burial at Thebes, Seamus Heaney’s adaptation of Antigone directed by Marcela Lorca at the Guthrie Theater in Minneapolis. For that production, one critic described how Frawley’s “dark, glowering set crumbles with ancient exhaustion as it evokes towering walls of crypts”. She herself was impressed by resources available to theatre designers in the United States compared with often underfunded and undervalued productions in Ireland.

Her costumes were magical surreal affairs which drew on her rich knowledge of international art, theatre and design. Her designs for Cois Ceim Dance Theatre’s The Wolf and Peter were extraordinary creations in and of themselves. Selina Cartmell, director of the Gate Theatre, said Frawley was a courageous, anarchic, and most imaginative creative force who had a unique ability to understand the writer’s vision.

Outside of her theatrical work, Frawley designed costumes for the film Michael Collins (1996), directed by Neil Jordan, and Gerry Stembridge’s Black Day at Black Rock (2001). She was also the first designer of the revamped St Patrick’s Day parade in Dublin and the designer for the ebullient Special Olympics ceremony at Croke Park in 2003.

Monica Frawley grew up in Beaumont, Dublin, the second of three children of ESB engineer Jack Frawley and Patricia Frawley (nee Cahill). Her mother, fluent in French, grew up in Birr, Co Offaly and the family maintained strong connections there throughout her childhood.

Frawley met her husband, poet, playwright and arts journalist Vincent Woods in 1992 at the Druid Theatre in Galway during preparations for his play, At The Black Pigs Dyke for which she designed the sets. Later that year, she won a London Time Out award for her designs for the Druid Theatre Company’s touring production of that play in Tricycle Theatre, London. Frawley went on to design and direct other productions by Woods including King Ubu, his adaptation of the French play, Ubu Roi for the Galway Arts Festival in 2006.

A great people watcher, she studied characters on the streets of Dublin. “People wear the most extraordinary combination of clothes and I try to reflect that in what I do. I often wanted to do a fashion show on the Luas with people getting on and off,” she told one interviewer.

Forthright and uncompromising in her approach to her work, Frawley also said, “It’s all about not being afraid to make a mistake, have a go, do it and talk to others. I see things that I’d like to change. I never stop but the audience just comes in.” A great storyteller and warm host, she enjoyed the company of friends and family, finding humour in ordinary every day events.

Latterly, she taught design skills and she was the founding head of design at the Lir Academy of Dramatic Art at Trinity College Dublin. She also lectured in design at the Institute of Art, Design and Technology in Dún Laoghaire over the past decade.

Frawley continued to enjoy her life right up to the end, swimming in the Mediterranean near the couple’s holiday home in Arboras in France in September 2019, going to London in November 2019 to see the English National Opera’s production of Gluck’s Orpheus and Eurydice, and the Mary Quant exhibition at the Victoria and Albert Museum, and spending time at her sister and brother-in-law’s holiday home in Portnoo, Donegal. She continued to draw up to a week before she died. And two days before her death, she worked on the text for a forthcoming book of her costume designs which will be published in May 2020.

Monica Frawley is survived by her husband, Vincent Woods, her sister, Mary, brother, Martin, nephews, nieces and many friends in theatre and the arts.