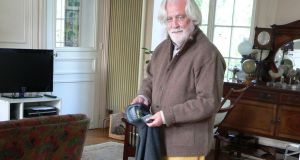 Patric Hollington was born and educated in England but his parents were from Clifden in Co Galway.

Patric Hollington, who has died at the age of 83, was the founder of one of the best-known menswear shops in Paris on the Rue Racine near the Sorbonne. Known for his love of fabrics and details, his Nehru collars, carpenter jackets, 20-pocket waistcoats and corduroy suits, his clothes were described in Edmund White’s memoir Inside a Pearl as artisan chic.

Amongst his fans were artists, intellectuals and politicians that included Milan Kundera, Gerard Depardieu, former prime minister Lionel Jospin and thousands of others who would receive his pocket-sized catalogues twice a year describing and illustrating his latest collections. He had been working on his winter 2020 collection inspired by the Bauhaus following visits to Tate London and Berlin.

Though born and educated in England, Hollington’s parents were from Clifden in Co Galway and as a regular visitor to the Costa del Sod as he called it, he was a customer of Inis Meain knitwear for more than 40 years. He became a designer almost by chance. After graduating from the London School of Economics in the 1950s, he hitchhiked to Cyprus where he landed work as a journalist with the Cyprus Times. A fluent French speaker who fell in love with France as a student, he returned to Paris with a job at a ready to wear export clothing company where he started to design.

He opened his shop in 1974 which not only has a huge customer base in France but also a wholesale side selling to Scandinavia, Japan and Germany. French men, he once said, are very traditional, the Italians in his opinion being the best dressed in the world. He would visit Italy every second week and show at the Pitti Uomo menswear fair in Florence twice a year. Every summer was spent in his house near the city.

He cut a figure of studied, offbeat elegance based on comfort and practicality. He hated ties.

The philosophy behind his garments is that they are unconstructed with no padding, interlining and even in winter with only half lining. Good quality fabrics with natural elasticity meant that his customers rapidly became comfortable in them. That approach allowed him to use relatively inexpensive manufacturing techniques so he could spend money on really good fabrics – handwoven silks from India, fine Japanese corduroy, chenille from France and merino flannel from Australia with 80 per cent of his fabrics from Italian mills. He used to describe himself as a fabric junkie and he was his own best advertisement, displaying a stylish sense of colour and with accessories like glasses from Meyrowitz and shoes by Lobb, he cut a figure of studied, offbeat elegance based on comfort and practicality. He hated ties.

In 1965 he married entrepreneur Nicole Aucouturier whom he later divorced. They had two daughters, Jennifer who works in the fashion industry and Karen who works in PR, and they and their families used to regularly stay with him at his home in St Maur outside Paris. “He was a wonderful grandfather,” recalls Jennifer, “and he really connected with teenagers, bringing them to exhibitions, introducing them to literature and culture. He was young at heart and remained passionate about his work and design right to the end”.

Patric Hollington is survived by his two daughters Jennifer and Karen, six grandchildren and his brother Angus.