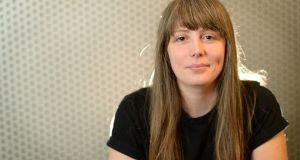 Kate Dolan: The moment that changed my life was when my short film Catcalls played at Fantasia film festival in Montreal in 2018. Photograph: Dara Mac Donaill/The Irish Times

What’s the biggest challenge you’ve faced in your life?

Probably coming to terms with my sexuality throughout my childhood and teenage years. It forced me to develop a very thick skin quite young, and to this day there are walls I still have to dismantle from that.

At the fabulous X-Pollinator event in November 2019 when [the writer] Dee Roycroft said to schedule in time to think when writing scripts. It was such simple advice but I’ve started doing it and it’s totally changed how I work.

Probably something generic like “be yourself”. What does that even mean?

Is there a moment that changed your life?

2018 when my short film Catcalls played at Fantasia film festival in Montreal. I couldn’t attend, but the next day I started getting a flood of emails from people who had seen it. Shortly after I signed with a US manager and an agent in the UK and US. It’s wild what one screening can do for you.

My mam. She raised me as a single mother while working full-time, and she achieved so much in her career too. She is a very strong woman and probably the most selfless person I know.

What is the most pain you’ve ever experienced?

I’m going to go with physical pain because it’s seared in my brain forever. I knocked out my front tooth when I was 11, and a doctor had to shove it back in without any anaesthetic. My mam had to hold me down. I’m surprised I didn’t black out.

Who or what has been the biggest influence on your career?

There are so many. Probably ingesting reams of Stephen King as a kid, watching all the horror I could get my hands on, also watching my uncle Michael write plays as a kid. I would sit beside him for hours, fascinated by it.

What location do you return to for a sense of calm and time out?

Going for a walk in St Anne’s Park in Dublin, made even better if my girlfriend and I can take her family’s dogs with us. Hanging out with animals is the ultimate tonic.

Probably being chronically late. Although I read recently that people who are late a lot are usually optimists and they just assume they will always be on time.

And your worst habit?

asked my girlfriend this one, and she said not taking enough time off. I’ve taken my laptop on way too many “holidays”.

What aspect of yourself do you privately admire?

Resilience. Working in film can be a struggle. You get a lot of rejection. Sometimes I surprise myself when I just keep pushing on despite all the obstacles that get in the way.

What personality trait do you think your friends would identify as your most dominant?

My chronic lateness? I asked around and weirdly the term “cheeky” came up a lot. I’m not quite sure what that means.

Do you have an unfulfilled goal?

I’d like to think all my goals will be fulfilled one day. Maybe failing to be any good at guitar as a teenager. Is there a particular moment in your life where you feel you were treated unfairly? Does a lifetime of being gay and a woman count? I think in the film, television and advertising industries there’s obviously still a lot of unconscious bias, so sometimes you find yourself in situations that feel unjust.

Is there a gift you tend to purchase repeatedly for different people?

The screenwriting book Into The Woods by John Yorke. It is the best.

What are you most proud of in your life?

I’m proud of myself for getting to where I am now in my career as a writer and director and persevering with this mad career despite the painful moments.

It’s not really a motto, but when I’m getting stressed out by something I’ll ask, ‘will I remember this moment when I’m on my death bed?’ If the answer is no I try not to sweat it.
Kate Dolan is a writer and director of films, music videos and commercials.