Ross O’Carroll-Kelly: ‘I just shake my head ... The dirty dog. The filthy hypocrite’ 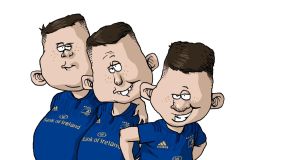 ''Focking p***k with ears,' Johnny goes – seriously, they’re like sponges at that age.'

I’m spending the afternoon babysitting. Or, as Sorcha calls it – always feeling the need to correct me on this point – parenting my own children.

So – yeah, no – we’re hanging out in the old man cave. I’m knocking back a few boredom-be-gones while throwing dorts at an oil painting of my father-in-law, which I recently bought at an auction for 10 grand.

I’m like, “Don’t walk across my flight-path, Leo, because I nearly hit you that time. Bear in mind, I’m on my third can here.”

But suddenly Johnny and Brian stort copying what Leo said, going, “Grandad! Grandad!” and then – this is hord for me to watch – they walk up to the thing and stort literally kissing the canvas.

Brian even goes, “Love you, Grandad!”

Which is something that pisses me off on a very deep level and something I decide to put, straight away, right.

He nods his ridiculous little head.

I’m like, “That’s just stupid! Seriously?” because that’s what an unbelievable competitor I am? “Think about what you’re saying, Brian. This is a man who told your mother not to marry me. Begged her, in fact. Went down on one knee to her, which – as she never tires of pointing out – is something that I didn’t do?”

I’m like, “What about you, Johnny, and you, Leo? Who do you prefer – Grandad O’Carroll-Kelly-”

“Grandad Lalor!” they both go, cutting me off.

‘Okay,” I go, “maybe I’ll rephrase the question. Who do you prefer – your Grandad O’Carroll-Kelly, who gives you a hundred euros each every time he sees you, or your Grandad Lalor, who thinks giving lorge amounts of money to children means they grow up with no concept of the value of it?”

Oh, that rocks them back on their little Docksiders. They’re suddenly looking at each other, remembering what Sorcha’s old man is actually like?

“Di**head,” Leo goes, which is nice for me to hear because it’s one of the names that I always call him?

I’m there, “I’ll phrase it another way. Who would you prefer – your Grandad O’Carroll-Kelly, who brings you to Scrumdiddly’s every Sunday afternoon, or your Grandad Lalor, who came up with the notion that sugar was the reason for your behavioural problems, rather than just plain boldness, and told your mother to give you goji berries and activated almonds instead of sweets?”

“Focking p***k with ears,” Johnny goes – seriously, they’re like sponges at that age.

I’m there, “And not to labour the point, goys, who do you prefer – your Grandad O’Carroll-Kelly, who brings you into town at Christmas and buys you absolutely everything you point at, no questions asked, or your Grandad Lalor, who saw the pile of presents that Santa left you this year and told your mother to take away half of them and keep them for your birthday?”

I watch their little eyes fill up with tears.

Suddenly, Brian bears his teeth in what would have to be described as an attack grimace. Leo is breathing in short bursts and Johnny’s face is as red as the goji berries that Sorcha tried to persuade him were “nature’s M&Ms”.

Brian lets out an animal growl and makes a run at the painting. In two seconds, he’s managed to tear the thing off the wall and the other two set about it with their fists and feet. The air is filled with the sound of canvas ripping and wood splitting and children snorling like wild beasts.

I’m going, “Goys, that was supposed to last me for a few months,” but then I hear Brian – between growls – go, “I focking hate you, Grandad!” and I think, hey, just leave them at it.

I end up sitting down to – yeah, no – watch them make absolute s**t of this portrait of their still smiling grandad. I once saw this David Attenborough documentary where this, I don’t know, gang of lions was eating this wildebeest while the thing was still basically alive. But the wildebeest was just lying there with this dumb grin on his face like he was trying to remember the punchline to a joke that someone told him years ago.

That’s what Sorcha’s old man reminds me of in that moment.

I sit back in my chair and I go, “Do your worst, boys,” as I open another can of the old giggle juice. And that’s when I suddenly spot it – right in the middle of this scene of absolute cornage.

I go in there like I’m clearing out a ruck, knocking Brian over and pulling Leo and Johnny out of the way, so I can pick it up. Brian calls me one or two names that would be unpublishable in a newspaper like this and I tell him that Nigel Owens would send him off for that kind of overreaction, probably with one of the great man’s withering put-downs ringing in his ears.

The envelope was obviously taped to the back of the canvas before it was framed. I rip it open. Inside, there’s – yeah, no – a letter. It looks old, judging by the way the paper is all hord and, I don’t know, stained brown from the presumably damp?

I read it once. And then I end up just standing there in stunned silence, my hort beating like a NutriBullet.

I go sifting through the wreckage of the painting, then I find the corner of the canvas with the signature on it. It’s just like, “A.F.”

The ortist was obviously – and this isn’t meant to sound, hopefully, sexist – a woman.

I just shake my head. He had an affair. The dirty dog. The filthy hypocrite. He was obviously sleeping with this – again – woman, while he was married to Sorcha’s old dear.

I sit back down, take a sip of my beer and I laugh the deep belly laugh of a man whose life is about to get a lot more interesting.