Michael Harding: I have solved the mystery of my Polish great granny 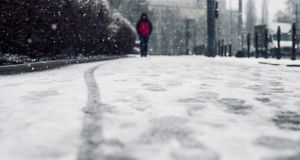 I love Warsaw in winter. I walk the city from one end to the other, dine in the shopping malls and write at my desk for long hours into the night, listening to Raidio na Gaeltachta. Photograph: Getty Images

When I got on the plane just after Christmas, I wondered was I mad; heading to Warsaw yet again. It sounded like a good idea in October, but as I lay on the couch after Christmas, Warsaw felt like a terrible mistake. But I had already booked the ticket and an apartment for a month and I wasn’t going to cancel all that.

I got an Uber taxi from the airport to the apartment in Praga, and the following morning, January 7th, I headed off in the freezing fog to the Cathedral of St Mary Magdalene for the Orthodox Service of the Nativity.

He approached me and I accepted his holy icon and his hand, and I made the sign of the cross in the Orthodox fashion, just so he wouldn’t think I was an intruder

Of course I was late. It was all over. The crowds were already streaming out the door and down the steps. I pushed against them and got inside where a choir was still singing and the main priest was mingling among the people; a very holy man to judge by the amount of ornate vestments he was wearing, and the gold cross that dangled on his breast. He smiled as he offered little laminated pictures of the Nativity to the faithful around him.

He approached me and I accepted his holy icon and his hand, and I made the sign of the cross in the Orthodox fashion, just so he wouldn’t think I was an intruder.

And then I went back to the apartment and placed the icon reverently on a shelf over the worktop so it could become the compass of my psyche for the following month.

I love Warsaw in winter. I walk the city from one end to the other, dine in the shopping malls and write at my desk for long hours into the night, listening to Raidio na Gaeltachta. I even listen on earphones as I walk the streets, so that sometimes when I ask for a bottle of water in a shop I find myself asking for a “buideal” of “uisce”.

It didn’t snow this year. But like everyone else, Warsavians have resigned themselves to global warming; history has taught them to be masters of resignation.

I spent two weeks watching fires burning in Australia on my laptop. Until I was distracted by the rising number of deaths from coronavirus.

On the 75th anniversary of the liberation of Auschwitz I went to the Museum of the History of Polish Jews which stands on green parkland in what was once the heartland of the ghetto.

It was a bright sunny day. Yellow trams stopped under the trees. A morning fog hung over the glass and copper surfaces of the museum.

I sat on a park bench watching Warsavians take the morning air; old men with bad hips struggling for breath. A young man with one leg, in an old wheelchair, pushing himself along the path. Mothers pushing prams as calm as Buddhist nuns. And an old woman pushing her ancient mother in another wheelchair; their faces almost identical, apart from the ravages of time.

I first visited Warsaw eight years ago because I felt the city was in tune with my own melancholy; and to solve the mystery of my father’s granny; he said she came from Poland.

When the Museum of the History of Polish Jews opened a few years ago I was in the door with my details to see if they could find a match for the mysterious woman who is buried in a Dublin graveyard with no tombstone. And they did find a matching record, documenting her birth in a village on the Lithuanian border in 1857.

I know of no other museum in the world that feels so like a church in its serenity and quietness. In fact I know of no church that possesses such a measure of serenity

I was moved and proud when I realised that I might have a tiny drop of Jewish blood in my veins, and I wrote the story into a book called Talking to Strangers.

Modern Warsaw gleams with glass skyscrapers and the steel girders of elegant buildings. And the Museum of the History of Polish Jews is a worthy and moving monument at the centre of the city.

I had a coffee in the restaurant and sat at a wall of glass to view the trees outside. I know of no other museum in the world that feels so like a church in it’s serenity and quietness. In fact I know of no church that possesses such a measure of serenity.

And I found my father’s granny there. So every time I go back to it I feel like I’m going home. And on the return flight to Dublin I always imagine my father’s granny travelling with me. Even if this time, I will have an icon of the Nativity in my breast pocket.