Hilary Fannin: A trip to Belfast feels like a much longer journey

Belfast’s so near my home, yet it demands diligence to navigate and to understand 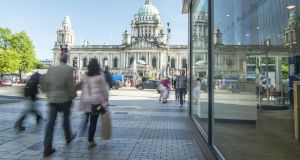 ‘Oh, I don’t like Belfast at all,’ a Dublin friend said to me when I told her about my weekend. Photograph: iStock

I took a taxi from Lanyon Place to the venue where I was to meet up with my colleagues and the eight young Northern playwrights we’d been working with in Belfast for the past few months.

Usually we meet in the Lyric Theatre, where, from the windows of the cafe, you can watch the Lagan flow. There’s a light-filled studio at the top of the theatre and, clearly visible beyond the rooftops of the surrounding redbrick Victorian terraces, the Harland and Wolff cranes, so emblematic of the city, which seem to strut over the docks like mechanical dinosaurs, their necks swaying blindly.

Last time, however, there was a change of location. I gave the taxi driver the address on the Newtownards Road and looked out of the window at the rain. There, on the east banks of the Lagan, the sky was blistering with sleet and the streets were empty, apart from a solitary figure walking into the storm with a jacket over his head.

The writers were kind to one another, sharing onion rings and battered chicken

We stopped at traffic lights. “Short Strand” read the ornamental sign at the entrance to an estate of rain-sodden houses. A moment later we were driving past murals depicting crouching UDA volunteers, guns cocked. Between two communities, peace walls made of mesh and fencing and brick were being battered by the same miserable gale.

At lunchtime the young writers in the group went out and got curry chips, bringing them back to eat in the room where we were working. They were kind to one another, sharing onion rings and battered chicken and spoonfuls of the slick mustard-coloured sauce.

While they ate, I watched the weather from windows that ran from ceiling to floor. The sky was like a wound, purple and brown and suppurating, while the sun, pale as the moon, broke through every now and again to illuminate the huge murals on the gable ends of the streets below, with their slogans of revenge and mourning.

When the chips were finished, the young writers read each other’s plays aloud. They’d come from all over Belfast and beyond, and they’d written about all sorts of lives, with all sorts of histories, all sorts of moments in all sorts of dimensions. Some of their work was tender, some violent, some seriously funny. It was – and I’m not being sentimental here – a privilege to be in the room with them.

Our day ended in the late afternoon; it was still raining. As the light faded, the cold almost became manifest: stealthy, gunmetal grey, permeating the long windows and seeping in under the doors.

I was late getting back to Lanyon Place station, and had to run to board the service to Dublin. The train was packed, with shoppers and students and tired-looking women on mobile phones and angry toddlers roaring to be heard.

At Connolly in Dublin, the rain was falling through the roof. I crossed the platform, boarded a Dart, disembarked, then walked across the wet, wintry park to my front door, my boots sinking into the marshy grass.

Most of the customers, as if on a collective impulse, had suddenly stood up and danced, weaving through the tables and chairs

Belfast is so near, so easily accessible, and yet after each visit, when I get home and shrug off my parka on the way to the kettle, I feel as if I have been on a much longer journey, as if I have been to a place that is not easily knowable, that demands concentration and diligence, somewhere that requires work to navigate and to begin to understand.

“Oh, I don’t like Belfast at all,” a Dublin friend said to me the following day when I told her about my weekend. “It’s so claustrophobic, and anyway it’s always raining up there.”

“It’s February – it’s always raining everywhere on this island,” I replied, though I wasn’t really listening to her.

Instead I was thinking about another recent trip I’d made to Belfast and an evening in an Indian restaurant there, on the Dublin Road, that a local friend had recommended, and the conviviality of the place, and then the walk back through the icy city streets, and the young tumbling out of bars and clubs in platform shoes and skimpy jackets like the young the world over.

And about how we’d gone for a late-night drink in a bar where a Turkish guitarist was playing on a miniature stage, and how the regulars had made requests to him, which he performed without hesitation or apparent effort.

And about how most of the customers, as if on a collective impulse, had then suddenly stood up and danced, weaving through the tables and chairs, spinning and strutting and whirling together with nonchalant ease, anything but claustrophobic in the tiny, crammed, joyous space.