The bee lurched between the pebbles, like a drunk in a yard of beer kegs, then died 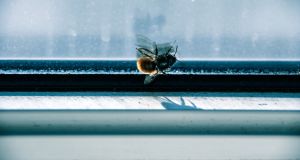 Michael Harding: 'I mourn all the dead, but nowadays I mourn the bees as well.' Photograph: iStock

There was a bee in the bedroom one morning, buzzing against the triple glazed wall of glass that we call a window, and which allows us view the lake and the mountain as a single canvas; as if we were lying in the open air, in the middle of a field, with the wilderness around us. It’s amazing the amount of glass in modern buildings, which helps people feel like they’re living in the open air.

Of course none of that would have impressed the bee. All he could see was the mountain, and the fat juicy apples hanging from a bough just feet away from where he was having a nervous breakdown; scrambling up and down the glass, without knowing what was blocking his flight.

He didn’t stop to reflect, or ask himself where he was, or why this was happening to him. He didn’t wonder how there could be an invisible wall between him and the apples.

He’s not a human and his brain is not evolved enough for that conundrum. Although his emotional response, an apparent blind rage at the mysterious blockage, seemed human enough to me.

I was moved by the serenity of her face in death

But I couldn’t bear listening to him in stress so I opened a window and lay in my blankets until he had found a pathway to the sky.

I used to kill bees if they annoyed me. I particularly enjoyed waiting until they rested on the back of my hand and then I’d give them a flick of my finger with the other hand. It was like kicking a football and watching it fly off into heaven. Although sometimes the bee got so flummoxed by the finger kick that he’d fall onto the ground on his back and then, without a moment’s compassion I might squash the poor creature to death with my shoe.

Now I go to great lengths to release them because I have a lot of reparation yet to make.

My attitude changed on a particular evening in summer many years ago, attending a wake house where an old woman was lying at rest.

It’s not that her life made any big impression on me personally, but I was moved by the serenity of her face in death, and the sight of her suburban garden outside, radiant with gladioli and dahlias. And the dignity of her daughters as they walked behind the hearse down the gravel avenue; their mother passing through a small forest of flowers that would never again delight her eyes. The bees hummed in the air as the cortege passed through, and one of them persisted in hanging around my head as I stood waiting at the gate.

Then the mourners got into their cars and headed for the church and I went home to sit on the patio: which was the moment when another bee chose to die before my very eyes.

The bee who died on the same day also stays close; a messenger as sure and significant as any sainted human

He was just lying on his back. I had done nothing to him. And even when I flipped him over with a twig, so that he might walk, he just lurched about between the pebbles, like a drunk in a yard of beer kegs, and then he gave up and fell sideways again. For a while he was upended, his feet moving slowly, like a clock coming to the end of it’ battery, and then he stopped and I knew I had witnessed his death.

Up to that point I had callously disregarded the happiness of bees. I felt entitled to stand on them, with the same equanimity as I might eat a rasher. So I asked a Tibetan monk who was my teacher at the time, if small creatures experienced death like we do.

“For humans death is complete,” he said. “But for tiny creatures, death is also complete. In that sense it is the same thing.”

The woman I saw being removed from her home that evening remains with me as a ghost in the garden; a person who loved flowers and maintained an eco-system that would bring joy to any hive of bees. But the bee who died on the same day also stays close; a messenger as sure and significant as any sainted human.

I mourn all the dead, but nowadays I mourn the bees as well. I suppose it was the image that woke me; the hearse whispering on the gravel, as it drifted through a jungle of globe thistle and wild daisy, and all the bees humming, as if they knew much more than any human might dare to imagine.

On Beauty: Deal with your liver spots without resorting to laser treatment
9