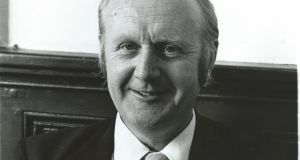 President Michael D Higgins described him as one of the finest Irish scientists. “Mike Cooley, in his books, including Architect or Bee?, and in all his life, was deeply committed to the delivery of science and technology for universal benefit,” he said.

Published in 1980, Architect or Bee? was a critique of the automation and computerisation of engineering work which put the case that “a new organisation of technology could provide social good rather than profit”.

Cooley coined the term “human-centred systems” in the context of the transition in his profession from traditional drafting at a drawing board to computer-aided design (CAD). The term – used in economics, computing and design – aims to preserve or enhance human skills, in both manual and office work, in environments in which technology tends to undermine skills people use in their work.

A native of Tuam, Co Galway, Cooley attended the local Christian Brothers school, where his closest friends were playwright Tom Murphy and trade unionist Mick Brennan. In spite of considerable resistance, the bright trio wanted to go the local “tech” to learn technical drawing and metal work, and to make stuff including an aeroplane.

With support from parents, the Brothers relented and allowed the boys cross the road once a week to the Archbishop McHale Technical School. Cooley remembered their reaction as one of scorn: “They couldn’t understand how a smart boy would want to work with his hands.”

“What is extraordinary in the life, the work and the social contribution, of Prof Cooley, and the others, is that they saw that excellence could be achieved through a combination of hand and brain, that curiosity was not an impediment to learning but rather a source of innovation,” Mr Higgins wrote in the foreword for Cooley’s 2018 work, Delinquent Genius: The Strange Affair of Man and His Technology.

The three friends would later train together as apprentices under the brilliant Viennese machine master Franz Kaplan in Tuam Sugar Factory– during the 1950s, it was the largest industrial complex west of the Shannon.

Kaplan’s wife Antonie taught Mike to speak German, and they encouraged him to study in Germany. He went on to study mechanical engineering at the University of Bremen.

His first job was with the Swiss engineering company Maschinenfabrik Oerlikon based in Zurich. He moved to London in 1957, where he worked for De Havilland which became part of Hawker Siddeley in 1960.

He joined Lucas Aerospace as a design engineer in 1962 and increasingly became involved in workplace activism. During the 1970s he chaired the local branch of the technical trade union Technical, Administrative and Supervisory Section (TASS). He was a key advocate behind The Lucas Plan, a radical strategy to avoid layoffs by converting production from armaments to socially-useful civilian products.

During the 1980s he was director of technology at the Greater London Enterprise Board which he co-founded with the Labour politician Ken Livingstone.

His archive has been donated to WIT, where next year a centre for science excellence will be built around Cooley’s work

In 1981, he was winner of the Right Livelihood Award for “designing and promoting the theory and practice of human-centred, socially useful production”.

Cooley held leadership positions and advised on numerous public and private sector projects. He was founding president of the International Research Institute in Human Centred Systems. He produced more than 40 scientific papers and authored or co-wrote 11 books.

He was a unique thinker who successfully critiqued the dominant view of the role of advanced technology in society, according to Dr Larry Stapleton, director of the Centre for INformation SYstems and TEchno-culture (INSYTE) at Waterford Institute of Technology. “He offered an alternative vision in which the dignity of every individual is cherished in a wonderful symbiosis of human and machine.”

“In Mike Cooley the Irish literary and scientific traditions seemed to fuse into one person. Delinquent Genius, has echoes of Joyce whilst simultaneously addressing itself to the cutting edges of our scientific age, with all its advantages and horrors ... he will be seen one of a few prophets who foreshadowed the digitally-enabled, highly automated civilisation which is now emerging.”

Stapleton notes “he was also a firebrand, courageously challenging powers that would subvert human dignity, especially in the workplace, sometimes at considerable personal cost”.

His archive has been donated to WIT, where next year a centre for science excellence will be built around Cooley’s work.

Mike Cooley is immediately survived by his wife Shirley Pullen who he married in 1961 and son Dr Graham Cooley. His son Stephen, who had MS, pre-deceased him in 2009.

‘To die of love’: The 1968 sex scandal that still fascinates France
5

Ross O’Carroll-Kelly: ‘I’ve never been much of a conversationalist, but I’m on fire with this woman’
10