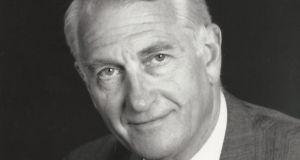 Brian Hogan, who has died at the age of 91, was one of Dublin’s leading architects and lived long enough to see several of the buildings he designed fall to the wrecking ball – including Canada House on St Stephen’s Green, Oisín House on Pearse Street, the former IDA Ireland headquarters at Wilton Place and much of the Setanta Centre on Nassau Street. Although he detested the term, he had unwittingly joined what architects call the “Rubble Club”.

Born in Booterstown, Co Dublin, to Sheila and Sarsfield Hogan, a senior civil servant and aide to Éamon de Valera as taoiseach, he was educated at the Catholic University School on Lower Leeson Street and afterwards studied architecture at UCD, then located around the corner in Earlsfort Terrace. After graduating in 1951, he worked in England before going to newly oil-rich Kuwait, where he became chief architect for the Ministry of Works at the age of 27.

Hogan leaped at the opportunity of working in such an exotic place, designing numerous public buildings for the Emir, Abdullah Al-Sabah, and this experience helped to shape his architectural values, his love of the Middle East and his personal life. It was in Kuwait that he met and fell in love with Marie Lawton, a young English expatriate. They got married there 18 months later and went on to have three sons: Mark (who pre-deceased him), Brian and Stephen.

After returning to Dublin in 1960, he set up a practice with Don Tyndall and they were joined seven years later by Richard Hurley to form Tyndall Hogan Hurley Architects. As the Irish economy developed in the 1960s, there was a growing demand for modern office buildings, and their first major commission was Lansdowne House (1967) in Ballsbridge, which was also the first in Ireland to use pre-cast wall units manufactured on-site by the main contractor, G&T Crampton.

“Brian was brilliant at concrete, very strong technically and brilliant at the architectural aspects. Nothing was ever done on a whim. There had to a reason to do everything,” says Michael Collins, who joined the practice in 1967. “Lansdowne House had so many structural firsts, and they were all Brian’s ideas: the first drained façade in Dublin; the first office with a load-bearing pre-cast façade, its concrete dimensions reducing with height; a pre-cast factory on the site.”

It was his father, Sarsfield Hogan – by then chairman of Irish Life Assurance – who had persuaded him to come back to Ireland. Indeed, Brian Hogan’s first completed project here was a low-rise apartment scheme at Simmonscourt Castle in Ballsbridge, commissioned by Irish Life, and he later designed the Elm House block for its Mespil Estate, on the banks of the Grand Canal. But it was offices that became his hallmark because he had become an expert on how to design them.

Substantial Victorian villas on Burlington Road were cleared away for brick-clad office buildings, which have since been demolished for much larger schemes. At the time, however, Hogan was the “architect of choice” for developers such as New Ireland Assurance and Marlborough Holdings, run by Ken O’Reilly Hyland, whose legacy to Dublin is Telephone House on Marlborough Street (1970) – a great pre-cast concrete hulk that may, or may not, be turned into a hotel.

Much of his work in the 1970s and 1980s was done for Hardwicke Ltd, the very private property company owned by Montague (“Mont”) Kavanagh, with whom Hogan developed a close working relationship. By then, he had refined the architectural expression of his office blocks to “fit in” with the predominant brick culture of Dublin and its human scale, which he valued enormously. “He became obsessed with the idea that his buildings shouldn’t be noticed,” Collins recalls.

Hogan also won major hospital commissions both at home and abroad, notably in Saudi Arabia, Iraq, Libya. Among his healthcare projects in Dublin were Beaumont Hospital (1983) and the Mater Private Hospital (1985), which required the demolition of a low-grade terrace of Georgian houses, including No 7 Eccles Street, legendary home of Leopold and Molly Bloom. Many of his office schemes also drew the ire of conservationists seeking to save historic buildings.

He made a point of commissioning art for new buildings, notably Desmond Kinney’s Táin Wall in the Setanta Centre, which is to be salvaged in its redevelopment. He also championed young artists, often purchasing pictures at their first public exhibitions, and in 1980 established the Mont Kavanagh Award for excellence in design. A passionate jazz and classical music-lover, he was an accomplished pianist and regularly attended the Proms in London’s Royal Albert Hall.

After Tyndall Hogan Hurley was dissolved in 1988, he set up Brian Hogan Architects. What followed was a period of rich professional fulfilment working on smaller but perhaps more meaningful projects including award-winning social housing schemes, Garda stations and buildings for several charities including the Multiple Sclerosis Society of Ireland, as well as becoming a trusted consultant on building and design for Siptu – including its controversial (and abortive) plan to replace Liberty Hall.

In 1995, at the age of 66, Brian and his wife Marie decided to adopt two grandchildren, Nadine and James, due to the ill-health of their father Mark, who had schizophrenia and subsequently died. Despite all the attendant financial and emotional investment in raising a second set of kids, he entered into it with gusto and discovered the reward of being a parent once again. He remained active until the end, even lodging an objection to plans for the redevelopment of Kevin Street College of Technology.

The elegance and ingenuity of Lansdowne House is his principal legacy to the city he loved and will hopefully be added to Dublin City Council’s Record of Protected Structures. His abundant kindness and warm nature meant he was greatly loved by those he worked with and everyone who knew him. He is survived by Marie, his wife of more than 60 years, sons Brian and Stephen, grandchildren Nadine, James, Tommy, Daisy, Lily and Poppy, his faithful dog Kitty and the trusty bicycle he was still riding in July.

Paul Flynn: A wonderfully easy and logical way to feed your family
6

Let’s go outside: The why, how and where of getting outdoors, whatever the weather
8

Rambling house on the Hill in Monkstown for €1.95m
Real news has value SUBSCRIBE