Michael Harding: ‘She went off this morning and I couldn’t give her a hug’

My daughter drove off smiling, the scarf around her shoulders enveloping her with my love 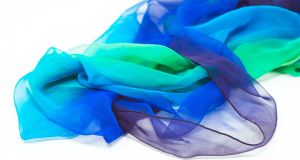 In Mongolia I remember people using blue silk scarves to say farewell. People would produce a blue scarf at every goodbye moment, and place it around the other person’s neck and then bow

When I was in Warsaw I used to look out the window and marvel at dog walkers in the nearby park. Men having their first cigarette of the day, with little pets on leashes; getting the dog’s morning bowel motion out of the way.The dogs found relief in the grass areas, and their owners scooped it up in plastic bags or little boxes.

The best thing about my cats in Leitrim is that they don’t require such attention. It’s as if they never passed anything through their stomachs; as if all the Whiskas that went in one orifice was just transformed into energy or perfume and never emerged anywhere else. I take my cats for granted. And I can only presume they look after themselves out in the fields.

Although, I must admit sometimes I take humans for granted too. I had a friend who worked in the art college in Warsaw, and I went to see him the day before I left. Art students were loitering in the corridors, displaying themselves in blazes of colour and tight trousers, leaning against window ledges, or sitting on the staircases. When I stepped over them they looked at me as if an old man ought to be less intrusive.

I reached my friend’s studio where he was in a fluster, alone at the window with two coffees. “You are leaving Warsaw,” he said, “I will miss you.”

She had a job lined up in the hotel for the summer, but that’s gone now with the lockdown. And so she’s off again

He grimaced as he drank the coffee, and then he declared that we should go to a bar down the street to have a farewell drink.

I said I couldn’t because I was packing. So he walked me down the stairs, onto the street, and as far as the mouth of the underground station.

“I will miss you,” he said. We hugged, and then he walked away.

But my packing only took an hour, and four years later I still baulk at how casually I bade him farewell, and I regret not spending more time with him that day. I didn’t appreciate his friendship. Not until that farewell hug. And the intensity of it still embarrasses me.

Last week, in the car park of the Gala shop, a farmer spoke to me about his daughter.

“She’s off again,” he said, across the roof of his Micra.

“I thought she came home from there,” I said.

“She came home at Christmas,” he said, “and told me that she was finished with England. She had a job lined up in the hotel for the summer, but that’s gone now with the lockdown. And so she’s off again; to Southampton of all places.”

“And do you know the worst thing?” he asked. “She went off this morning and I couldn’t give her a hug; off to England, walking out the door, and she turned to me and said, no Dad, definitely not; and me waving me two arms about like a dying goose.”

“She was only thinking of your health,” I said.

He couldn’t finish the sentence.

In Mongolia I remember people using blue silk scarves to say farewell. People would produce a blue scarf at every goodbye moment, and place it around the other person’s neck and then bow. It was a delicate intimacy without touch.

I often found myself wearing the same blue scarf for days.

There was one particular monk with whom I developed a close friendship, and he too put a scarf around my neck in Ulaanbaatar as I was leaving; and I was still wearing it in Moscow airport 12 hours later; the ribbon of blue silk as comforting as if my friend were standing at my shoulder.

I even stocked up with blue Mongolian scarves before I left. And nowadays I stock up with blue scarves every time I visit the Tibetan Buddhist Centre in Co Cavan.

I used one recently to bid farewell to my daughter when she was leaving the garden. I wrapped it around the side mirror of her van, and then stood back.

“That’s my hug,” I declared, maintaining a two-metre distance.

She took it and folded it across her shoulders, and drove off smiling; the blue cloth around her as radiant as if it had been made in heaven to envelop her with all my love.

And she was only going a few miles up the road.