Sheila Geoghegan obituary: Joined Aer Lingus in 1960s as one of their first air hostesses

Lives lost to Covid-19: ‘She would tell us great stories of her travels and the people she met as a flight attendant’ 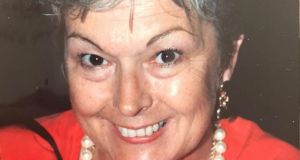 Sheila Geoghegan’s early career as one of Aer Lingus’s first air hostesses in the 1960s brought together three of her great loves: travel, music, and meeting people.

The second-youngest of six children, she was born in Warrenpoint, Co Down, on April 22nd, 1941. Her mother Maureen worked in the drawing room in Harland & Wolff in Belfast, and was a keen historian and contributor to The Irish Times. Her father Eugene was a plumber and a prizewinning athlete. Her siblings were Emer, Ethna, Maureen, Brendan and Sunniva.

Sheila trained as a library assistant, before travelling to London to work as a personal secretary to a blind barrister in a legal firm.

In the early 1960s, she returned to Dublin to join Aer Lingus as one of their first air hostesses. She flew back and forth to European destinations, before graduating to the transatlantic crew. She loved going to concerts and shows on Broadway while in New York. She was part of the cabin crew when The Dubliners went on their first tour to Germany.

At Dublin Airport, she met Michael Geoghegan, who was working for Aer Lingus as a purchasing manager (later for Aer Rianta International, where he helped open many duty-free shops around the world). They married at the Church of St Mary on Haddington Road in 1965. They had three children, Niall, Barry and Conor, and lived in Clontarf, Raheny and Malahide.

After her youngest son was born, Sheila left Aer Lingus to spend time at home with her family. She returned to work years later after her sons had moved out, as a library assistant at Trinity College.

“Growing up, she was our moral compass,” says her son Niall. “She was a big fan of music, and introduced us to many great musical artists through her records. She used to quote poems her father had taught her. She was very knowledgeable about the great painters from all over the world.”

Through her sons’ love of football, she became a great fan of the game herself, following Liverpool, Arsenal, Celtic and of course, Ireland.

“Mum was genuinely interested in people,” Niall says. “She would tell us great stories of her travels and the people she met as a flight attendant. When she worked at the library, she was in her element, surrounded by all the great works and stories, and had a great relationship with her colleagues. In recent times, she knew all the family history of her carers.”

In recent years, Sheila suffered from ill health; her strength never fully recovered after surviving seven weeks on a ventilator with double pneumonia 12 years ago.

She lived at home in Sutton with community care support, until she was taken to Beaumont hospital on April 10th. Within 24 hours she had been diagnosed with Covid-19. She said goodbye to all her children and grandchildren over the phone, and spent a couple of hours with her son Barry at her side the day before she died, on April 19th.

Sheila was cremated in Dardistown Crematorium on the morning of her 79th birthday. The short service was attended by a small gathering of family members.