Lives lost to Covid-19: Joe was always waiting for Mayo to win the All-Ireland 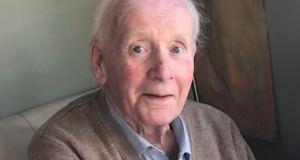 Joe Jennings: ‘We just spoke to him on the phone but we couldn’t give him a hug or a squeeze or a cuddle,’ his daughter said.

Joe Jennings was so proud of the All-Ireland minor medal he won with Mayo in 1953, that it and the cup he got from Ballinrobe GAA club were placed on his coffin for his funeral.

He was proud too of getting the highest grade in Ireland for geography the year he did his Leaving Certificate.

Born in Rahard, Ballinrobe on May 13th, 1935, he was the 10th of 13 children and his sisters Bridie, Vera and Frances are the surviving siblings.

“He wanted to join the Army but had a knee injury so he went to the UK and met my mum, Margo, a trainee nurse from Dungarvan, ” says his daughter Rhoda.

She is the youngest of the couple’s four children, with three brothers – Ivan, Paul and David.

Joe and Margo married in September 1960. “He trained to be an accountant but always wanted to be his own boss and, in 1967, he and my mum took over a pub and he became landlord of The George in Witham, Essex. ”

They returned to Ireland in 1981 and opened Kenilworth Nursing Home in Rathgar, which they ran until their retirement, when they moved to nearby Rathmines.

“When he couldn’t pay GAA any more, he took up golf and he met his friends and he loved his garden.”

He became Margo’s carer when she developed dementia and he minded her until he had to go into hospital.

He had a bypass four years ago when he was 80, never fully recovered, and went into St James’s Hospital in early February for treatment for his slowly failing heart. Somebody in the ward was diagnosed with Covid-19. He too then tested positive on March 27th.

Visiting had not been allowed since early March but the family spoke to him every day. “He was typical old school. He didn’t like WhatsApp and he didn’t like Face Time and all of that. So we just spoke to him on the phone but we couldn’t give him a hug or a squeeze or a cuddle.”

He died on April 9th and, along with his All-Ireland medal and cup, photos and flowers from his garden were placed on his coffin. His grandchildren had all drawn pictures and sealed them in envelopes which were put on the coffin to be cremated with him.

“He was always waiting for Mayo to win the All-Ireland but he’ll be watching it from somewhere.”