‘I’m cut off from my partner, and I’m dying for a good... encounter’ 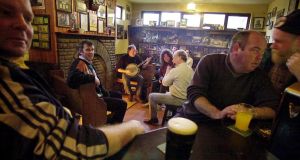 ‘It made me long for the happy days of last summer, when . . . musicians washed their faces, opened flute cases, guitar cases and readied themselves for festivals.’ File photograph: Brenda Fitzsimons

In the old days I’d sit in the garden on the first of May and sing, “Mary we crown thee with blossoms today.”

But that had to stop. Covid-19 has tempered my exuberance even though the fields still turn white with daisies and flowers drip off the hawthorn, like snow falling from every branch.

The blackbirds sing to me. And the robin flits in and out of the beech hedge with kisses for his beloved. Even magpies cackle in the high spruce tree, making their own music.

The hen harrier is a quiet ghost; she glides across the sky above the cliff in silence

There is a bird box on the alder tree. Not that any bird ever laid an egg in it. They probably think it’s an airbnb nest, so they just come for a few hours and go away.

The hen harrier is a quiet ghost; she glides across the sky above the cliff in silence. But last week seagulls arrived from Sligo and they cackled and cawed over my head for the afternoon, like an unruly stag party in Carrick-on-Shannon. And as for me, I have nothing to sing about.

At the start of the lockdown I had hot flushes and violent nightmares that I wouldn’t dare share with a psychotherapist. As the weather improved I loitered in the garden imagining angels and saints whispering in the trees. Although I wouldn’t tell that to a therapist either. I was just trying to find ways of coping with stress; and I wasn’t the only one in that camp.

“I’m hanging in there,” one woman shouted at me through the window of her Berlingo at the beginning of the lockdown. She’s a singer, and often attends the Joe Mooney Summer School in Drumshanbo.

“Just hanging in there,” she repeated. “I have plenty to read but I’m cut off from my partner, and I’m dying for a good... encounter.”

She didn’t actually say “encounter”. In fact the word she used was the one that rhymes with “duck”. She’s not a woman that bothers with coy innuendos.

That night I found her on YouTube, singing an English ballad and it made me long for the happy days of last summer, when business people polished their doorknobs and shop counters with quiet confidence and musicians washed their faces, opened flute cases, guitar cases and readied themselves for festivals. Hairy old banjo players in camper vans coasted up and down the byways of western counties, while young married couples went hunting for set dancing workshops, and sean-nós sessions or just somewhere to park the children for a week.

Everyone was innocent before Covid-19. Everyone squashed together in pubs and lounges; bare-shouldered women rubbed against the elbows of old flute players as the crowd at the bar waited like sardines for tunes to be flung out. Pipers strapped up and scattered their reels as pints rested on low tables and everyone bowed as if in a church. I used to think the music could never stop; it was the heartbeat of the world. If the music stopped, I thought, then the world would end.

I remember meeting a group of men on a beach in Tenerife one summer selling towels and suffering under the noonday sun. They came from west Africa but in the cool of the evening I saw them sit in quiet cafes on back streets playing music for each other as they pined for their homeland.

I met a nun in Mongolia one time who longed for Tibet as she sat beside me in the back of a jeep and sang Michael Jackson songs as if they were slow airs.

And one night in west Cavan an emigrant home from Melbourne sang the Hills of Donegal with such honesty that nobody could follow him until tea was made to draw a line under his loneliness.

But no lament or dirge can be sung yet, for the hurt in the world caused by Covid-19. Perhaps the day will come, many years into the future, when voices in shaded bars across the planet and in pubs on the wild Atlantic way will sing new ballads and laments for all that passed in this dark year.

But it’s just too early yet. We haven’t a clue what may be still to come. So we must leave it to the wild birds this summer to cry on the wind in the hills above Lough Allen, or in the gardens of suburbia, assuring us that the heart of the world still beats with unbending love.

Cocktails at home: the best mixes and kits to buy
8

Lives lost to Covid-19: Mother of six is fondly remembered as an active member of the community in Crumlin

Lives Lost to Covid-19: The Green, Green Grass of Home was his favourite song to sing

John Donegan obituary: ‘Everyone knew him, he was always telling jokes’

Lives Lost to Covid-19: Dublin who lost sight in his 20s was devoted to his wife and God