Michael Harding: I had strong urges to shoot all the birds

‘Shite! shite! shite!,’ I roared, as I leaped up in rage, and ran towards the door 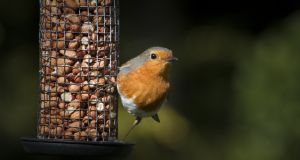 ‘The birds insisted on aggravating me; because they never touched the seed unless I took my eye away from the lens.’ Photograph: iStock

I had an uncle who didn’t like starlings. He’d be sitting at his kitchen table, as tranquil as an enlightened Tai chi master, but then he’d gaze out the window, notice a starling on the bird feeder and suddenly he’d lep up, shouting, “Bloody flying rats.”

He lived alone, and I was young and arrogant enough not to understand that little things become important to a person who is confined in a small space for long periods.

Now I’m almost as old as he was when he died, and I’m severely confined by the lockdown so I’m more aware of how small things can become obsessions to a solitary man.

For example the song of the first cuckoo in late April was like milk in my ear. The bird was fresh to the singing. But after a while others arrived, bellowing across the lake, day and night, until eventually they all went hoarse, and sounded like dogs barking in the distance. I had strong urges to shoot them.

There was one little twitter that started before dawn outside my window; just one single tweet repeated for hours, like a tiny persistent creak in a mattress. It kept me awake, and after a few days I begin to understand what white Anglo-Saxon males mean about keeping a gun under the pillow.

“You’re unwell,” he said. “You must never tell people you want to shoot small birds. You’re just getting things out of proportion.”

One morning I was distracted from my obsession with the little balls of twittering feather outside the window, by a video call from a friend in London.

“Have you heard the birds these mornings?” she wondered. “Are they not just wonderful!”

She was so enthusiastic that the next time I was shopping in Aldi’s I bought bird seed.

Then I went into the attic and found a telescope attached to a tripod which I once bought for a video camera but could never manage to connect it.

So I scattered the seed, and positioned the telescope on the patio.

But the birds insisted on aggravating me further; because they never touched the seed unless I took my eye away from the lens. When I stood up to go into the house they descended on the seed and fed like ravenous turkeys. But as soon as I got back to the lens they had all flown away again.

Dreams are terrible... I was in a coffin, bound hand and foot. In another dream I was a young girl bricked into a wall

My friend from London called again, in tears.

“I’ve split up with Robin,” she declared.

I thought she was winding me up, until I remembered her boyfriend’s name actually was Robin.

She described his lack of attention, his long absences, and not least a recent infatuation with another woman.

“Have you thrown him out yet, or did he just go?”

“He just didn’t come back,” she replied, “from Bristol. And then he sent me an email.”

“Dreams are terrible,” she confessed. “I was in a coffin, bound hand and foot. In another dream I was a young girl bricked into a wall. That sort of thing.”

“I don’t think the virus induces nightmares,” she said.

Living alone, feeding birds, and patiently reading his way towards death with cancer

“I wouldn’t bet on it,” I replied. “If the walls of nursing homes had ears, and could speak, I suspect they would record a grim account of human dreaming.”

I tried to get the conversation around to my telescope and the birds in the garden, but I felt like a self-obsessed child compared with what she was suffering.

The following week the rain came and the small birds stopped singing. In their stead two hooded crows arrived, ate all the seed and settled in the trees. I was incensed. But I scattered more seed, hoping the finches and tits might return.

Hours later I was sitting at my desk when two long black wings glided across the garden, and the hooded crow dropped an enormous dump of skittery white poo on my telescope.

“Shite! shite! shite!,” I roared, as I leaped up in rage, and ran towards the door.

And then I remembered my uncle; how gentle and saintly a human being he was; living alone, feeding birds, and patiently reading his way towards death with cancer. And it struck me that he may have been more lonely than he ever admitted, or than I had ever realised.