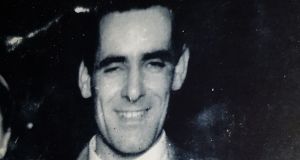 Francis Musgravestarted work at CIE at 17 years of age and remained there until retirement in 1985.

“He spent his whole life in Dublin,” Eamon Musgrave says of his father, Francis. He was born on November 1st, 1920 in Dublin, grew up in Phibsborough, and then spent the rest of his life near the Navan Road.

At 16, he went to work for CIÉ as a coach builder; a company he was loyal to all his life, and with whom he spent his entire working life. “He was a hard worker. He worked six days a week, and did overtime on Saturdays.”

In 1956, he married Elizabeth Fay. They had two children, and seven grandchildren.

Musgrave never learned to drive, as he availed all his life of the free travel that came as part of his job. While he wore overalls every day to work, in his leisure time, he always wore a tie and a suit jacket, “even if he was just getting the bus into town.” When not on a bus, he was on his bike. A life-long non-smoker, he liked to keep fit.

Together with Elizabeth, they dressed up in the evenings and went ballroom dancing in the National Ballroom. He loved jazz, Glen Miller, and that whole era of music. The two of them went to “every horse meet around Dublin.” The Curragh, Fairyhouse, Leopardstown. They loved the buzz from the racing community, and the day out. They travelled as far as the Isle of Man a few times, but no further, preferring home.

“He valued old-fashioned honesty. He was a man of faith, who never missed Mass on Sundays. Every Sunday, without fail.”

When his wife died in 1998, and then his son in 1999, his remaining family didn’t know how he would adapt to these losses. Although he didn’t go dancing or to the races any more, Musgrave received great support from the family and friends who lived near him on the Navan Road, especially his niece, Helen Finn. Collectively, they helped him to keep going. He still went to the bookies, eventually learned to cook a chicken, and loved watching all kinds of sports on television: racing, snooker, football.

He moved to Elm Green Nursing Home two years ago, where he continued to wear a tie every day. He died on March 29th, two days before his Covid-19 test came back positive. Francis Musgrave would have been 100 years old this November.