Brigid Sreenan obituary: A love of knitting and legacy of craft

Lives lost to Covid-19: An independent woman who would not tolerate bullies 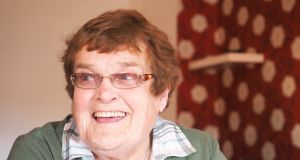 “She always said she was never happier than when she was helping her father on the bog as a child,” recalls Dermot Sreenan of his mother, Brigid. Born Brigid Fallon on May 27th, 1931, in the townland of Greenhall, Co Longford, her family were small-hold farmers. “She was from that generation who had nothing,” he says. “It was in the days when sons inherited everything; all the land, and she was bitter about that, I do know that. She would have wanted to stay on the farm, but couldn’t.”

Sreenan left school soon after the age of 12. She was sent to work with an aunt at a hotel in Moate, Co Westmeath. “It was indentured slavery. Cleaning rooms for no pay, she got money to go to the pictures and that was all.”

After two years, during which time she had not once been home to see her parents, Sreenan returned home for a holiday and decided not to return to Moate. She went on to first work in a bar and grocery in Sligo and then at a series of golf clubs in the east of the country. When she was working at Baltray in Co Louth, she met James Sreenan, who was working in the local post office.

They married in 1966 and when he was promoted they moved to Cavan. They had two children and, subsequently, three grandchildren.

When her husband died in 2004, Sreenan “made the most of her new independence” and travelled to spend time with other family members in the United States and United Kingdom.

She loved to knit. “She was always making matinee coats. She made them for nieces and nephews and friends of our friends. Then she’d end up attending the christenings and the weddings of those babies. You could say she left behind a legacy of craft.”

Despite initial protests, Sreenan admitted to loving the spa breaks her close female relatives took her on, later in her life. “She was up for anything. She made those breaks fun for everyone.”

In January of this year, Sreenan moved to Craddock House Nursing Home in Naas, Co Kildare, where she had settled in well. She had a good friend already there and the two of them used to joke about organising a “break out” once the restrictions on visiting came into place.

Sreenan contracted Covid-19 in March and died on Easter Sunday. She was 88.