Coronavirus: There’s no denying that my mental health is becoming fragile

Michael Harding: I try to look on the bright side, to reassure myself all will be okay 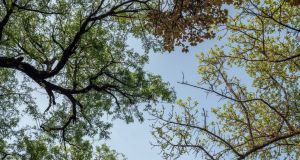 I was mowing the lawn one day and found a lump of frogspawn in the grass, dried out and with no future. I might have shovelled it into the nearest drain without any emotion, but I was overwhelmed with grief, as if I were looking at a mining disaster. And I know that depression begins with such unwanted sadness.

I try desperately to look on the bright side of the virus. I try to reassure myself that everything will be okay.

The spring air is cleaner than it used to be. Birds sing with a deeper resonance. The trees put out their buds with an astonishing defiance; as if nature itself carried a coded message – everything will be okay in the end. Hope may seem lost with each new death but love has become more visible in every hospital corridor in the country.

But there’s no denying that my mental health is becoming fragile.

“You’re on the ladder going down,” the General declared, “and you dare not descend any lower, or else you will fall completely into the swamp.”

On another occasion recently a helicopter crossed the sky at an altitude low enough to make the trees shiver. I looked up at the undercarriage, steady as the hull of a ferry boat, blading a determined path through the air and I took it as an omen of something terrible to come.

When the death rate in Italy was out of control, a friend sent me a recording of her younger self singing an Italian song. When she was young she trained as a classical singer and she loved Italian music all her life and though she is old now, and lives alone, her voice travelled like an angel across the internet, singing Oh del mio amato ben.

I got enormous comfort as I listened to her voice, reaching out to me from so far away and so long ago. I played it over and over again, as if it was a prayer for all the dead.

But my emotions are also volatile; I slip from such nostalgia into moments of cynicism and anger without the slightest reason; one close-up of Donald Trump’s face is enough to turn me sour for an entire evening.

And I’m tormented by negative voices in my head; they possess me and drag me down, taunting me with the fact that the universe really couldn’t care less about the plight of sick Italians or Spaniards, or anyone else who dies of the horrid virus.

The only thing I can do is call to the angels to come for me; I need them more than tablets. And they always arrive unexpectedly and cut through the dark

So I turn off the news sometimes and dig into another episode of forgetfulness on Netflix. I stay in bed. I abandon the very things that help me avoid melancholy, like exercise or meditation; and I abandon them at the very moment when I need them to protect me from depression. It’s called despondency; the final toxin that sweeps me off the ladder and floors me in a swamp of melancholy.

And the only thing I can do is call to the angels to come for me; I need them more than tablets. And they always arrive unexpectedly and cut through the dark.

One day a photograph fell out of a book that had not been opened for years. It was a picture of a woman I was close to in my youth on the streets of Mayo.

After seeing the photograph, I was haunted by her presence for the rest of the day. And when I feel asleep that night she came to me in a dream.

The evening sky was orange and we were on the beach at Enniscrone, walking along the edge of the blue turquoise ocean.

The clouds lifted. The universe was there again, all around me, like a mother I could trust

The virus was in the dream too so we didn’t touch when we parted. We just waved from our separate cars, smiling through the windows.

“You’ll be okay,” she said, as she drove away. I watched as her car got smaller and vanished over a hill on the Ballina road.

When I woke up it was morning. And I realised instantly that the bleak mood had been dissipated. The dream had released me once again from a kind of bondage.

As I walked into the garden I could heard her still whispering, “Everything will be okay.”

The clouds lifted. The universe was there again, all around me, like a mother I could trust. I looked at the sky and saw no helicopters and heard no engines roar: No bad omens hanging over the trees. Just the rustle of leaves; like an angel’s wings fluttering in the invisible heart of the world.